The cost of collecting

Collections scare me. It doesn’t matter if the collection contains knickknacks, chotskies, baseball cards, coins, stamps, records, figurines, or Barbie doll heads. A big compilation of similar stuff often overwhelms my senses — mostly ’cause I’m compelled to add up the cost. Yet another reason you shouldn’t invite me over for dinner. Sigh.

Anynofunblogger, marketers like to sell us stuff in volume — it’s good for business, right? I mean, who hasn’t flipped on their TV and heard the marketing message “Call now to collect the whole set!” at some point during a commercial interruption. Exactly!

And so, without thinking (hey, it happens), I went on Twitter and tweeted:

The response was immediate. People connected with the need and desire to collect crap. Some people emailed about the horrors of hoarding. Others defended their Royal Doulton figurine collections, calling them “art”. One woman argued that her collection of Barbie doll heads is priceless. Priceless? Really?

“More like hilarious, and kinda creepy,” I replied. She defriended me immediately.

Then came a challenge from a fellow named Fred. Fred, not unlike many faceless humans who occasionally take jabs at me, wrote:

“Come off it Kerry. We all hunt and gather something. Open your closet. What have YOU collected over the years?”

Me? A collector? Nooooo. Never. Nope.

Fred, the faceless jabber, intrigued me. Not only did he mock my Twitter squawk, but he challenged me to survey my stuff for a sign, any nuance, of a collection. By his rules, a collection isn’t necessarily a traditional accumulation of coins, comic books, stamps, or figurines from a series with uniquely minted numbers. Nope. According to Fred, a collection could be a stash of similar clothing, a bevy of books, maybe even yards of yarn. So really, a collection could be anything you’ve amassed over time. Interesting, right?

And so I strutted to my bedroom and peeked into my dresser, glanced over my shelving, and swung open my closet. I looked, I scrutinized, and then I fainted. No, I didn’t find a box of severed Barbie doll heads. But I did see a sizable stack of … 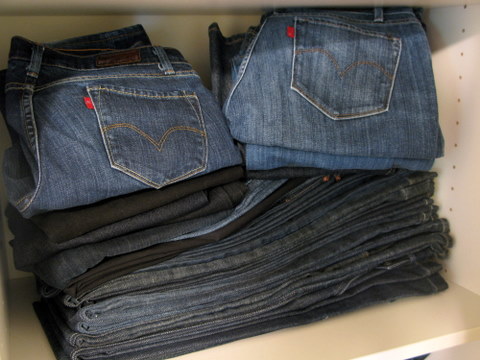 JEANS! OMG! Welcome to my wacky stack of denim. SHOOT ME! I counted my neatly folded pile of delicious jeans, all 31 pairs of them.

I hated Fred. Stupid, snotty, ohh sooo smarty-pants Fred. Over the span of eight years I have spent (by rough calculation) nearly $1,600 on indigo cotton fabric. At around $50 a pair (most less, some more), my lovely Levi’s collection was busted by a dude whose name rhymes with dread.

Now, like other types of ‘collectors’, I have my reasons (*cough* excuses) for amassing mass amounts of ass-enhancing pants. Over the years my weight has fluctuated (what, your’s hasn’t?), styles have changed, and washes have worn. Back in the day I started with straight legs, then flares; I loved boot cuts, boyfriends, skinny jeans, and today matchsticks are cool. Many women buy jeans with varying inseams for flats and heels, so I’m guilty of owning regular and tall lengths too. Now add in a few different washes, rises, and shades and suddenly I’m the wearer of 31 pairs of blue pants. Smurfy.

Horrified by my hoard (which I secretly love), I emailed Fred with my results, and asked what he collects (besides bloggers’ egos). Half expecting Fred to reply with photos of severed Barbie doll heads, I was instead issued another smack down, a second challenge. Our emails went something like this:

Fred: What does your husband collect?

Me: Who, Carl? He’s German, so probably beer cans.

Me: Yah. Well, no. He’s thrifty, so he returns those for the deposit. Gawd I hope it’s not Barbies, or discombobulated heads, or jeans. Letmethinkforabit.

And so I thought about it — for two seconds. GOT IT! Carl’s collector tick is different from my own. Rather than amassing a bunch of useful (*cough*) wearable items, he’s more likely to ‘save’ old deprecated things for ‘later’. Case in point: 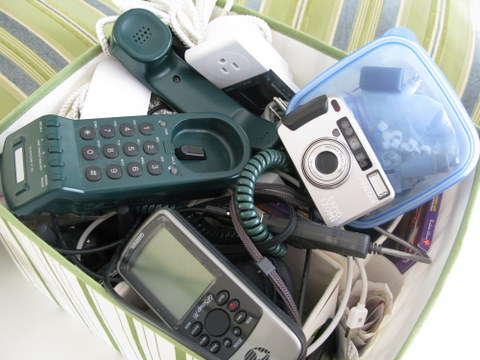 Hello, Carl? It’s the 1990s calling! They want their technological junk back! I’ve been squawking at Carl for nearly 10 years about that danged green phone. I hate it. So he loves it.

And then there’s this: 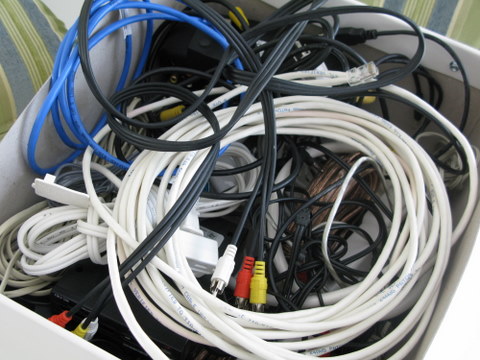 Do you think the man likes wires? Yeppers. A lot of wires. There must be three boxes of wires, cables, cords, and other coiled doodads stockpiled in the man’s closet. But the worst of the technical junk has been removed from our humble home — ’cause I made him ‘get rid’ of it. Or so I thought.

Let me introduce you to The Barn. 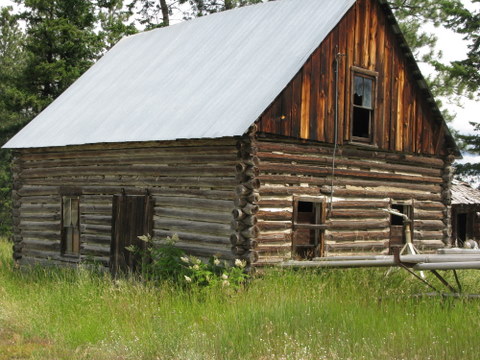 Back in the 1920s The Barn was home to the charming Christensen family — the early settlers who owned the farm where I live now.

Today The Barn is home to Carl’s relic computer collection. 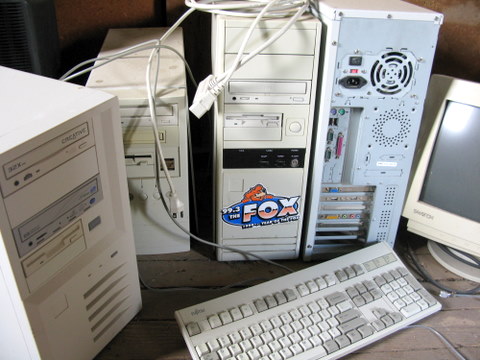 Hello, Carl? It’s the 1990s calling! They want to know where you’re storing the floppy disks, dial-up modems, and ‘high speed’ CD-ROM drives. Crap, looking at this junk reminds me of the day I met Carl at school. The year was 1999, he was tuned in to the radio station 99.3 The Fox, listening to Ace of Base, and coding something cool on his state-of-the-art almond colored tower computer. Yes, the man was a sexy beast. If I could replicate the sound of an old skool modem connecting to surf the information superhighway I would. But I won’t. Promise. 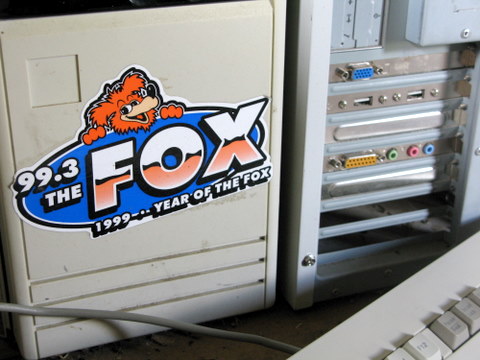 Feels just like yesterday eh? Yes, that sticker really says The Fox. No, I can’t make this s$it up.

Well, collections scare me. They don’t have to be branded, numbered collectibles that are part of a special set. A collection can really be anything you’ve stockpiled over time. The cost can include the price paid for buying the crap, or the fees surrendered for storing the stuff. If you don’t own a family barn then you’ll need to own a bigger house or rent a storage locker off-site to contain the crappy costly situation.

So just as Fred challenged me, I’m challenging you. What do you collect? Look under your bed, search your closets, and admit to yourself the crazy stuff you store. You could save a little (or a lot) of money by knowing your spending triggers and reducing your stockpiling habits.

Now excuse me while I slink into my skinnies and head over to The Barn for a little archeological clean-up action. While I don’t covet computer relics, I most certainly have the perfect pair of jeans to wear.