After taking a 21-year break, David Chilton has (finally) written a follow up to his mega bestseller, The Wealthy Barber. This news horrified me. Not because Chilton takes long vacations, but because I’ll probably need a second bookshelf to deal with the success of his new book, The Wealthy Barber Returns, which is also available in Canada. 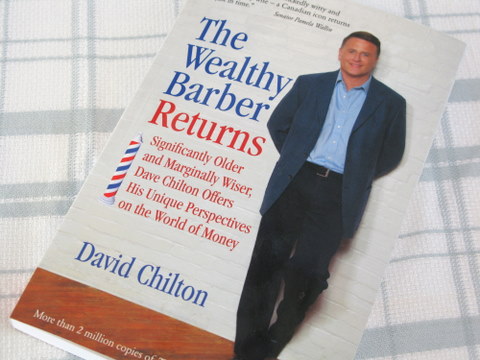 You see, Chilton’s first book broke all sorts of Canadian publishing records by selling over two million copies in the land of Eh!, and I think I’m partially to blame for his blockbuster sales. Over the years I’ve collected four copies of The Wealthy Barber — all of which sit happily on my bookshelf waiting for a fifth to become a stack.

Reasons to read the first copy

It all started when my folks gifted me with my first copy of The Wealthy Barber in my late teens — they wanted me to grow into a financially responsible adult. Since I was a teenager, I did the right thing by ignoring their advice, and pocketed Chilton’s tome for later. I had no interest in cutting hair.

A second copy landed in my possession by accident. I was dating a guy who lent me his Wealthy Barber because he thought I’d like the story. That guy dumped me three weeks later, so I kept his copy.

I earned The Wealthy Barber hat trick in my mid twenties at a library book sale. In this phase of my life I became obsessed with money, mostly ’cause I had none. And with a $17,000 student loan to pay back, I decided to get serious about my debt. So I bought a bunch of dog-eared personal finance books for a few Loonies — The Wealthy Barber was in the mix. Convinced I was haunted by this dang book I finally read it.

I loved the story of Roy, the title character, who gives several 20-year-olds financial lessons in a fun way. I needed the kick to start my retirement savings, stash some cash in an emergency fund, and pay off my student loan. I became an automatic saving machine, so I forgot about Roy.

My life was largely Wealthy Barber-free until I met Carl. I should have run screaming when Carl’s father — an English as a third language German immigrant — gave his son (my new boyfriend) Chilton’s barber book. When Carl moved in with me a year later we added his copy to my ‘Chilton collection’. Slightly fazed by my double duplication of Wealthy Barbers, Carl quickly learned of my (un)healthy obsession with personal finance.

Now we’re at today. Life is good. I’m blogging about saving bucks while livin’ on a frugal farm, my dog at my side. I’m not worried about limited bookshelf space, Chilton’s publishing prowess, or angry ex-boyfriends hunting me down on Facebook looking for lost copies of The Wealthy Barber. Yeah, life is grand … and then the dang mail arrives. 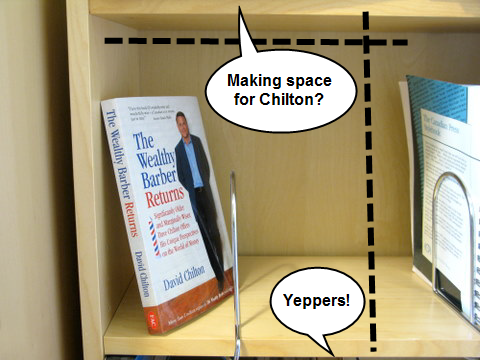 I’m on the phone with Ikea pricing out BILLY bookcases and calculating shipping costs. I’m slightly horrified (and mostly shocked) to see an autographed copy of Chilton’s new book, The Wealthy Barber Returns (which is also available in Canada), in the mail with my name on it. This is cool. This is scary. This means I’ll be gifted with a dozen more copies of Chilton’s books over my lifetime. I’d better order a third bookshelf.

This is the weirdest personal finance book review ever. Chilton deserves better. The thing is, David Chilton doesn’t write standard personal finance books — he’s a little unusual. There are no graphs, charts, or hard mathematical data within his pages. Nope. In The Wealthy Barber Returns Chilton writes witty stories and shares hilarious experiences in a very fun format. This is why we like him.

Chilton is a genius. Not only does he enjoy my blog, but mentioning me in his highly anticipated new book nicely solves my costly bookshelf dilemma. I figure, if I’m in his book, maybe friends, family, and bad ex-boyfriends will stop gifting me copies. This realization gives me a case of the sads. So I give The Wealthy Barber Returns a second read to cheer myself up.

This time through I try to studiously sticky note all the witty, fun, and often weighty things he writes about saving, spending, borrowing, investing, retiring, and earning money.

Here’s the important stuff, the weighty stuff, the real reason you should read this book:

The chapter on term life insurance is excellent. Read that one too.

So barely 150 pages in, I run out of sticky notes. This is a problem. How am I going to thoughtfully review the follow-up to the biggest selling book in Canadian history without 3M at my side?

Overwhelmed, I give up and hand my autographed copy to Carl. I figure, Carl is not a funny guy. As a German immigrant (from Germany) he would be better suited to seriously review such an important book. Carl is also marginally better at math.

It was worth a shot.

Carl (my formerly serious German spouse) could not stop laughing. My man was broken by The Wealthy Barber Returns. I’m sending David Chilton the bill.

The chapter on ‘Dash’ the race horse gave my German the chuckles. He also enjoyed the chapters on index funds, lizard brains, plastic surgery, and teachers. Yes, I’m writing about a personal finance book.

But I do know that I rarely love a book about personal finance. I think you’ll love it too. I think your teenagers will love it (ten years from now). I think you should steal it from the bad boyfriend who’s about to dump you. And you most certainly should agree to move in with a German immigrant if his father offers a fresh copy as an incentive.

I really must stop writing now. I’ve got an Ikea bookshelf to assemble.