It’s hard not to want a better life while standing on a crammed subway during rush hour. Between the transit delays and the people smells, I must be doing it wrong. OK, I’m totally doing it wrong — I paid a full adult fare and I still didn’t get a seat. 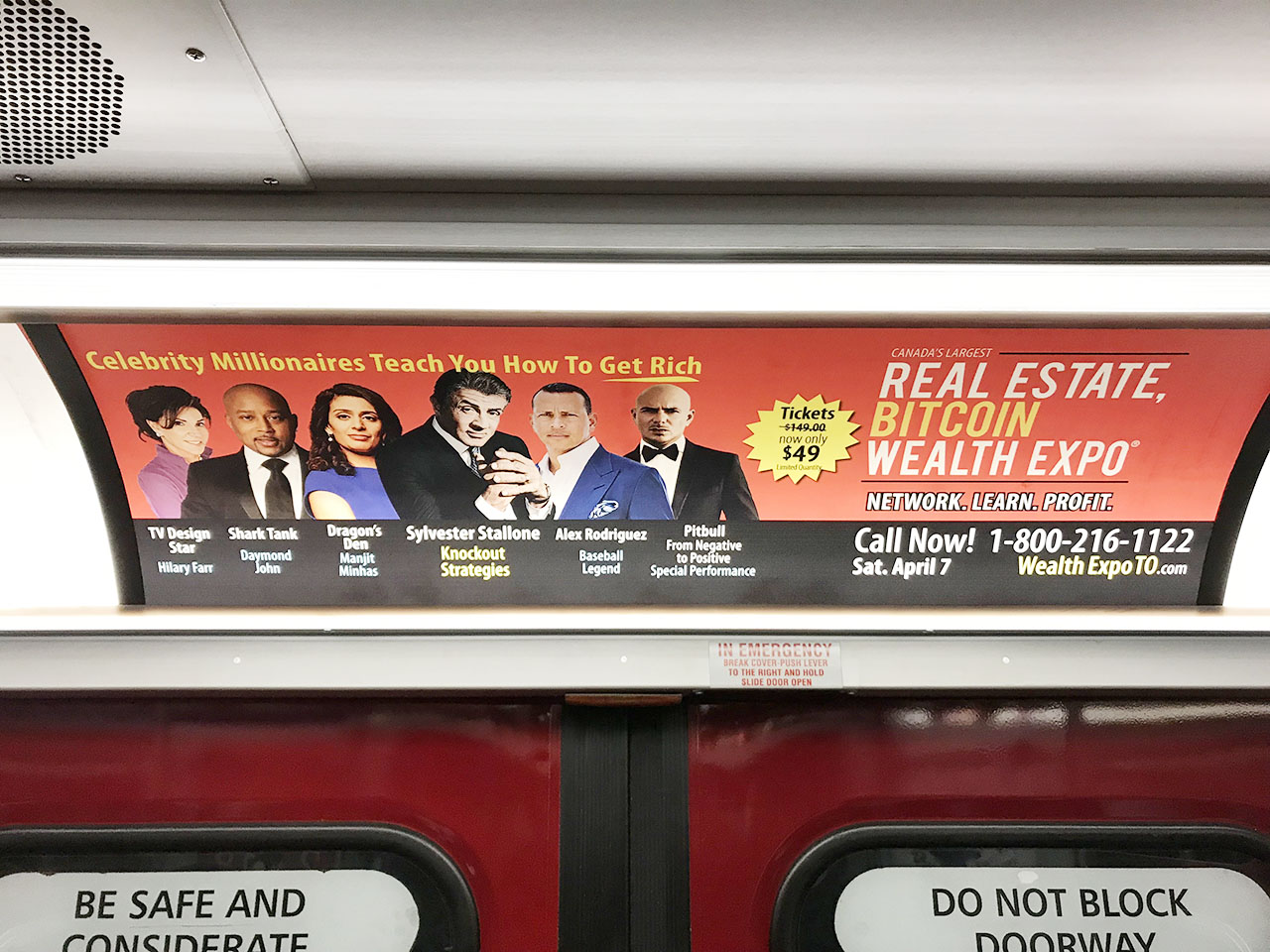 Then I see the sign — it’s a subway ad for the Bitcoin and Real Estate Wealth Expo. For a one-time fee of fifty bucks, a panel of celebrity millionaires will teach me how to get rich, fast.

The line up is money: Sylvester Stallone offers knockout life strategies (like Rocky), Alex Rodriguez shares his game-changing winning ways (minus the steroids), and Pitbull will explain how to go from negative to positive (in a song). I’m pumped.

As a personal finance journalist with a 10-year history of writing, speaking, and TV-ing sound ways to help you manage your money, I couldn’t pass on the opportunity to learn faster ways to build wealth. My method takes time — to succeed you must cut costs, put money aside, and live below your means. I’m tired of my current means. I want big houses (also called mansions), luxury cars (known as “Not the Subway”), and a big enough passive income to hire small enough rappers to actively serenade me about my incredible wealth.

The advertisement makes it sound so easy. What could go wrong?

I am at the Real Estate Bitcoin Wealth Expo. What am I going to learn here? pic.twitter.com/apObj7j1so

I arrive at 9:30AM with my VIP Expo Pass hanging around my neck like a noose. I thought I had a priority ticket but it turns out everyone here is a VIP. Kudos, everyone! 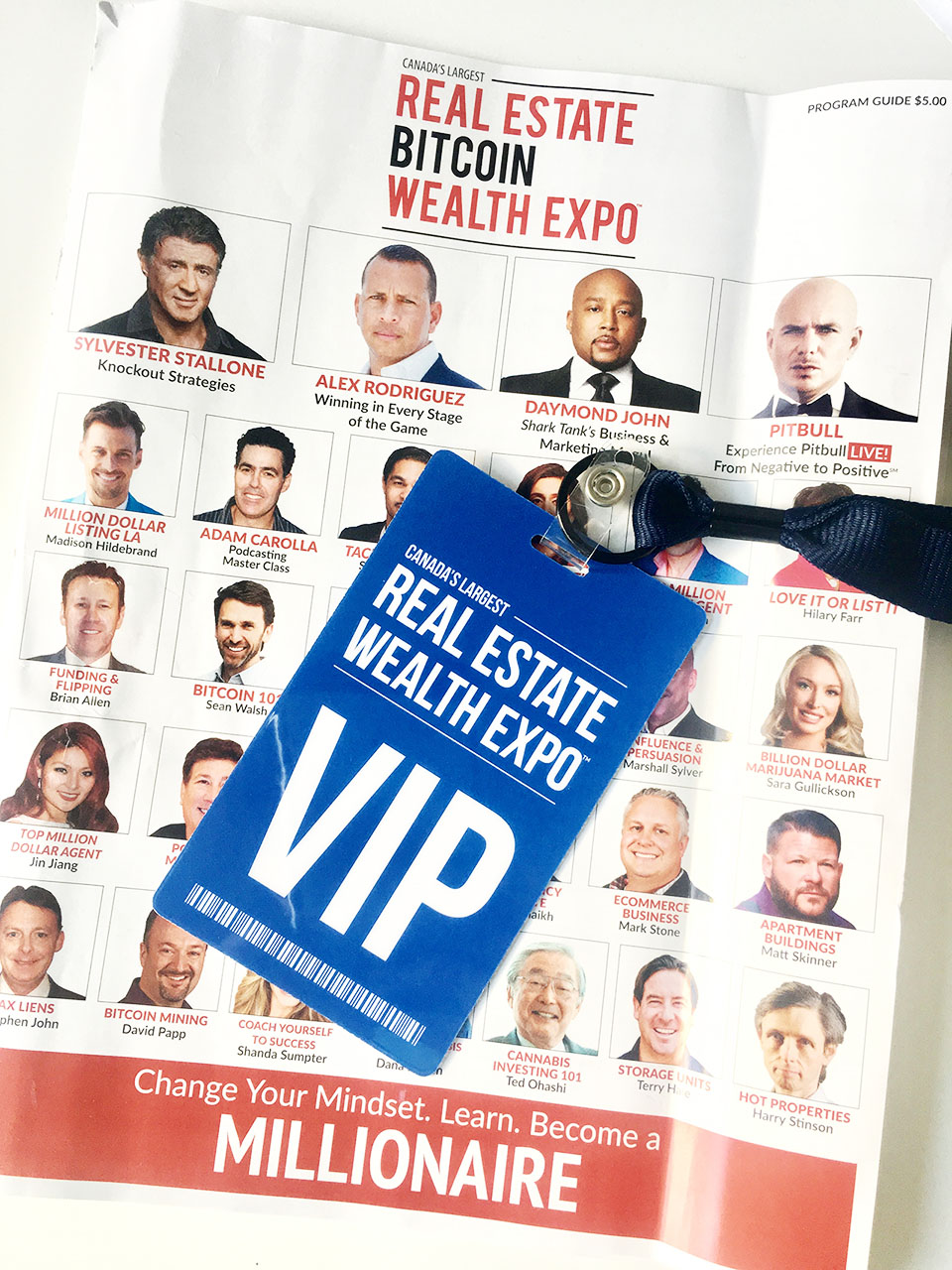 I also discovered the event started at 7AM. Since the conference didn’t post a speaker’s schedule — I emailed several times for one — I missed Manjit Minhas, of Dragons’ Den fame, keynoting on “pursing your passion”. She founded a $137 million brewery business, so I’m guessing her passion is booze.

I’m already bummed. Not only did I miss a limited edition female panelist (only 17% of the event’s speakers are women), but I’m starting to think organizers don’t want us to know how to navigate this event.

No worries. I’m here in time to win some Bitcoin. Maybe.

I didn’t win the $1,000 worth of Bitcoin. But I’m about to learn about the “Bitcoin Strategy”

Not sure how to contribute bitcoin to my RRSP or TFSA. pic.twitter.com/wqYwi9WLZf

Speaker: “Bitcoin is the greatest form of money ever invented.”

“It is based on neck tattoos.”

Because if you tattoo something on your body you trust it. pic.twitter.com/2vGe19S4Gl

Bitcoin has more “moneyness” then other forms of currency.

Speaker: “If someone can’t explain it to you, you probably shouldn’t get into it.”

Me: 👀 Waiting for them to explain cryptokitties. pic.twitter.com/j0eowk3mVb

I still don’t know how to spend, invest, save Bitcoin. I don’t think the speaker knows either, but he does know a place where I can buy Bitcoin. I’m taking a hard pass on Bitcoin neck tattoos and wondering how Bitcoin boasts more “moneyness” than cowry shells, USD, and Starbucks Cards.

Hold onto your panties, people. Are you ready? pic.twitter.com/dPipzCjS5D

Tweet your business idea to AROD for a Shark Tank style one-on-one.

A Rod is taking questions.

AROD: They are related because they are sports.

A-Rod isn’t exactly a profound speaker, but he’s big and takes up a lot of stage space. I feel richer just being in his presence.

The crowd is restless, we need a break. So let’s build wealth like they do on Wall Street, by dancing for it.

It’s dance party time. The top mover gets the money in a suitcase.

Every investor knows that winning money stored in a suitcase is one of the four pillars of investing. But to really make money I need something less physical, more mental.

The missing puzzle piece to millions is… hypnosis.

We are learning how to use persuasion with the power of hypnosis. This is a drug free strategy.

“It’s good for the economy. Everybody wins.” pic.twitter.com/4CfiOhZpQq

This event is all about giving FOMO. 🤑

The Fear of Missing Out (FOMO) plays big at the Bitcoin and Real Estate Wealth Expo. All the so-called “big money-making opportunities” have time limits and windows open for payment. The financial courses cost between $99USD to $2,500USD — so making a quick decision to “invest” in a course is how the expo gets you to part with your cash, fast.

There’s no time to reflect. They only want “investors” who are “motivated winners”, no reflective losers. I’m motivated to throw up. Time for some levity.

Are you ready Toronto?
“The biggest room is the room for improvement” pic.twitter.com/BKWNVD9E5E

Pit Bull is comparing the cocaine business to entrepreneurship. pic.twitter.com/ZHkiF14lR5

Pitbull is telling us how life works. With platforms. And narcissism.

I wish Pitbull would just sing.

Pitbull keeps name dropping Tony Robbins as inspiration. I guess he’s not in tune with the news? pic.twitter.com/ZWpvph6zHg

Pitbull is telling us he should have bought Napster.

Can someone tell him about Metallica?

Are we in a real estate bubble?

I have my ThunderStix ready.
Are you ready?

A renowned real estate investor and bitcoin master is next, Sylvester Stallone. pic.twitter.com/bcaeiHRil9

This is my first pair of ThunderStix. I’m hoping to use them for something constructive, like hitting myself repeatedly for attending this event. But I need to make it through another “investing course” before I get to see Sylvester Stallone speak. I’m gonna do this!

While waiting for Rocky, here are a few tweets I missed adding to the thread. From earlier. pic.twitter.com/VmXmvwcLA7

I went for coffee to refuel, and now I’m staring at arrows dancing across a graph on a screen. I’m a big fan of building a balanced portfolio through ETFs or index funds using The Couch Potato strategy, so to me deciding how to invest my hard-earned money by following dancing arrows feels like gambling.

The Couch Potato Portfolio is an investment strategy that keeps costs low by building a diversified portfolio of index funds. Many Nobel laureates have recommended indexing as a way to build wealth.

This is a “tool set” for buying and selling stocks.

Then you’ll be rich and can buy lawnmowers and swim with sharks. pic.twitter.com/yvJwhkuggZ

The course price just dropped to $99.

“If you don’t love it you get your money back.”

It pays to be motivated. Look at the return! pic.twitter.com/q4yndy6Jon

THERE IS FINE PRINT!!!

“The experience described is not necessarily indicative of the results other investors may expect to achieve. Results will vary.” pic.twitter.com/6APQK0IUhy

So people are buying the course. I want to yell “NOOOOO”

Get ready to climb some steps with Sly. pic.twitter.com/xj2E1vfet1

Sly is on stage to deliver a speech about real estate.

He must be good with bitcoin too because the crowd is losing it. pic.twitter.com/Yb1OzZVg3z

Sly says his mouth is “crooked” because he was delivered with forceps. He also mentions his speech impediment.

This is a fun speech. Probably because no bitcoin selling.

“I was always the guy with the snarl. I was the thug,” says Sly.

ME: Does he know where he is? pic.twitter.com/RmaroK4MEX

“Rocky just wanted a chance to fail. You’re not all gonna hit a double, but you’re still in the game,” says Sly.

He was so poor he sold his dog. Then he sold the Rocky screenplay. They didn’t want him to act, so he battled to get the job. He faced his fear.

“I hated Arnold Schwarzenegger. I dreamed of ways to beat him up. I didn’t want him to succeed. Fuck him.”

“Everyone needs an advisary,” he says. Arnold pushed Rocky, I mean Sly, to be better.

“Money can’t buy you happiness. Money enables you to be the schmuck you were born to be.” Sly pic.twitter.com/M6feuTdA59

Before I end with Stallone, a few motivational money-making quotes I missed because gobsmacked.

Question to a panelist: What is your number ONE secret to success?

Panelist: "Go look in the mirror, lift up your shirt. Now look at your stomach. Ask yourself, 'Are you hungry?'"

ME: I am doing this right now. I am starving. Haven't eaten all day.

I am trying to get more motivated. I really am. But now I want to drink.

Sly: “You only get one life. One friggen life per person. And then it’s gone.” pic.twitter.com/aUw5C3ZDlR

Stallone didn’t prepare a speech, he says. He’s gone off on a few tangents, and because I love math I’m into it.

He closes with “Keep on dancing!”

Themes of the day:

1. Rags to riches. EVERY keynote speaker talked of having no money, then striking it rich. Motivation, tenacity, hunger, and putting "skin in the game" made the difference.

2. You are family. Financial sellers want you to feel like you belong. Beware.

3. Easy street. There's no effort, just put money down. Passive income is key.
4. FOMO. Don't miss out. "Sale ends in 10 minutes." Pressure cooker.
5. Knowledge. "It's easy. I'm telling you everything you need to know." Trust me.

6. Women? There were no FEMALE keynote speakers. Women were on two panels.
7. Friends. I got through this EVENT THING because Rachelle @LandlordRescue recharged my phone 3 times, brought me food, and told me to keep going. Show her love. I mean it. More love.

I've been writing and speaking and TVing about personal finance for over TEN years. Read the comments on this thread. Read my blog: https://t.co/DiyKy5AW8z

After 12 hours of dancing, Bitcoining, and being sold to over a loudspeaker in a massive hall, I have one final thought.

It’s important to think critically and not accept everything (or anything) a friend, family member, banker, investment advisor, or a wealth influencer tells you. If it sounds too good to be true, it probably is.

Update: I spoke to BNN about the Real Estate Wealth Expo

I went on BNN’s House Money with Greg Bonnell (@greg_bonnell) to talk about the Bitcoin Real Estate Wealth Expo. “It really concerned me that this was allowed to happen.”

Also, I brought my ThunderStix. 🙂

VIDEO: BNN: An inside look at the Bitcoin Expo