Being resourceful is child’s play

Hook the biggest bass, win five bucks. Those were the rules, and no one vacationing in Ontario’s cottage country during the early 1980s debated them as fact. It was our end-of-summer ritual after all, and everyone — youngins and fogies alike — lined up on the lake-side dock with the hope of hooking the winning fish.

The prize money wasn’t the lure. Most of us kids spent the summer playing on the beach together, and adding a few extra dollars to our personal ice cream purse wasn’t a big deal. The deal was ruling the dock for the summer, and catching the big bass would give one bragging rights before too many childhood summers turned us into young adults. 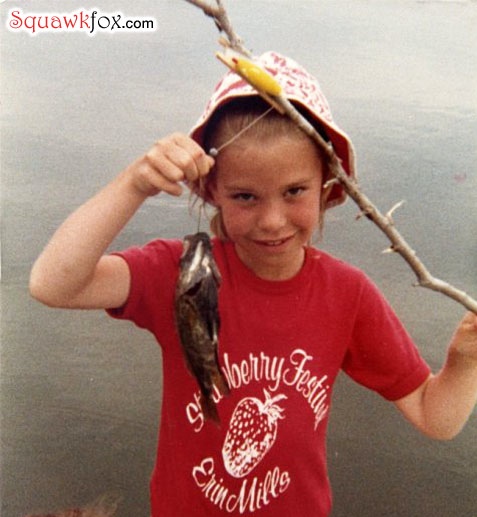 I wanted to win. OK, I wanted to bury the boy who smashed my epic sandcastle — that would be the ultimate victory, a just reward for my unrequited crush. But there was a small catch to my otherwise big plan — I owned no fishing tackle. Without a proper fishing rod, reel, and bait I had no hope of rocking the dock on the big day.

My problem was unusual on the lake. Since the cool kids came from means, they proudly sported fancy fishing equipment worth at least one of my parents’ paycheques. All the fogies were retired, so they had the good gear too.

Being a creative kid with a playful imagination, I refused to be beaten by a technicality. I rarely owned the neatest, newest things anyways. Heck, my coolest contribution to one class’s show-and-tell was an unusually sized piece of breakfast cereal. That Corn Flake was massive, and it was delicious.

Anyhoo, I would grow up to be a latchkey kid responsible for the safety of a younger sister, and with two hard working parents scraping by to put food on the table, yet still affording fun cottagey summer vacations, I wasn’t one to ask for pretty things. I had to make do. I also had to make my sister tasty after school snacks, usually something with Corn Flakes.

Back at the dock, I knew the fishing gear could be found. One just needed to know where to look and have the confidence to compete with tacky tackle. Braving the gaze from the shiny gearheards would be the hard part, but the thought of beating all the boys was the boost I needed. And so the search was on for a less-than-perfect pole.

A fishing rod is really just a big stick. It had to be long enough to raise over the dock, yet short enough to yield strength. I didn’t know much about flexibility, durability, or pokey wooden bits that bite when held too tightly, but there were a bunch of fallen branches strewn around the beach courtesy of a recent wind storm. A quick jaunt around the pile revealed a bent branch that spoke to me. I liked the colour of the bark.

Moving on, I needed some stretchy string to dangle into the water. My mom, being a registered nurse and fervent supporter of proper dental hygiene, had a lot of the hated flossy stuff spooled in the bathroom — I think she called it “silly string”. Mom snagged this line though when she refused to let me play ‘Go Fish’ with the family’s dental floss. I needed another plan.

Why not just ask someone’s grandpa for some fishing line? Seemed easy enough. Most of the old dudes had a supply of the stuff, and I only needed a few arm-lengths to get the job done. My favourite grandpa, the target of need, wore a fishing hat complete with feathery lures and poorly-sewn emblems of honour. “Survived Muskoka ’78” was written on one patch, some Shriner thing on another. I liked this guy, and he laughed when I shyly asked to borrow some extra line. He winked as he handed over his used stuff, complete with hook, sinker, and a yellow spooling thinger. Good ol’ Grandpa would regret his charitable choice one hour from now.

I wouldn’t have a reel or bobbin for this fishing fest. No bother. I needed bait, though. Live bait — the stuff all the rich kids used — cost a buck per wormy bucket. I hated worms, and using my ice cream money on something untasty seemed like an epic waste of cash. I didn’t have time to dig for a few choice wigglers, so I set my eyes on something that didn’t cost a lot of time, or dough.

A quick trip to our kitchen table netted some bait worthy of my hero’s quest. These were my wonder years after all, so grabbing a fresh bag of white Wonder Bread seemed the proper choice. Removing the crusts and rolling a few dough balls was free — poking the hook through the fluffy stuff wasn’t gross like worms either.

The last step was fastening the line to my stick. Dad was great with knots and moderately talented with duct tape, so he stuck everything on my stick and kicked me outta the cottage, fast. He didn’t want mom to catch me with the bread.

Stepping onto the dock was bliss. The boys looked at my duct-taped rod and Wonder Bread bait and laughed. The seasoned grandpas fawned over me with kindness and love. I was adorable, yes. They would all lose, damn skippy.

Besides, my brimmed fishin’ hat and red “Strawberry Festival” t-shirt signaled that I was a contender. Sure, I wanted to be feared. But I was mostly grateful to have a small enough body to fit onto the last, least loved, spot on the dock. Splinters be damned.

The great ‘Bass Dock Fishing Contest’ of early 1980-something was on. I dipped my dough into the lake, and waited. We had one hour to bring home the big fish. There was trash talk, there was lure envy, and some of the grandpas drank beer. The boys looked to their fathers for encouragement, I hid my wonder bait from mom. The day was perfect, really.

Forty-five minutes into the quest I felt a slight nibble, then a strong tug on my dough ball. I had already lost a few delicious slices to sun fish and those crappy carp, so another ball biting the dust was business as usual. What I didn’t notice at first was the large school of bass basking in the glow of my hook. The grandpas noticed, and quickly made the move to dip their fancy lures into my fishin’ hole. Those jerks were no match for my wonder dough though — the fastest, strongest, and baddest bass in school got to my ball first. Dad jumped to lend some muscle for the upheaval.

You weren’t allowed to catch a bunch of bass and choose the biggest for the prize. Nope. This was a catch and release contest, and you had to pick your fish wisely before entering it into the final weigh-in. With everyone marvelling over my dough fish, I decided to keep her and wait to see what others caught.

Fifteen minutes is a long time to wait when you’re a kid. My dad had the jitters too, so he ran back to the cottage to grab his Nikon camera. This could be a photo worthy of his slide projector show at Christmas.

The officiate of the day was Mr. David. I don’t know his first name, but he was a special lawyer type, so his decision would be like the law — fair and final.

Some girls are just bad bass

I want to bask in this moment but there was no contest.

The girl boasting a twiggy stick, water drenched duct tape, and Wonder Bread dough balls beat all the boys sporting fancy equipment that day. Dad snapped a quick photo to commemorate my victory, the boy who decimated my sandcastle punched my shoulder, and the generous grandpa friend examined my choice of bait in wonder.

I bagged the biggest bass with nothing more than a knack for being resourceful. Having the ability to find clever ways to overcome difficulties, the creativity to reuse useful stuff, and the foresight to see the magic where others have failed to gaze are the tools I’ve taken with me into adulthood. Determination to make do with less works too.

I think being resourceful is child’s play. If a kid can do it, why can’t you?