How to survive a trip to IKEA

At some point in your life you’ll need something to sit on. This realization could happen at college, after moving into a new home, or when the pitter of little feet threatens to patter your flooring.

Enter IKEA — Swedish for good luck putting this s$it together — it’s the perfect shopping space for broke ass students, fawning young couples, growing families, and anyone on a budget who likes eating meatballs while swearing at Allen keys. 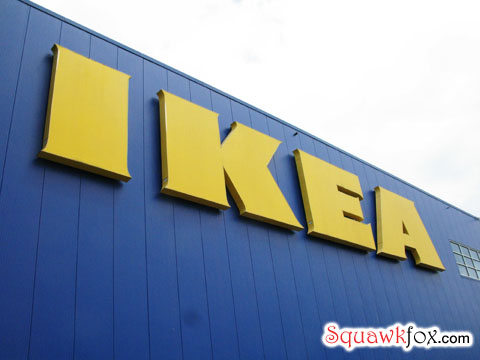 Heading to IKEA may sound like the perfect solution to life’s furniture frustrations. All those charming room installations and darling storage shelves are the things we all love to look at, mostly ’cause none of us live like this at home. 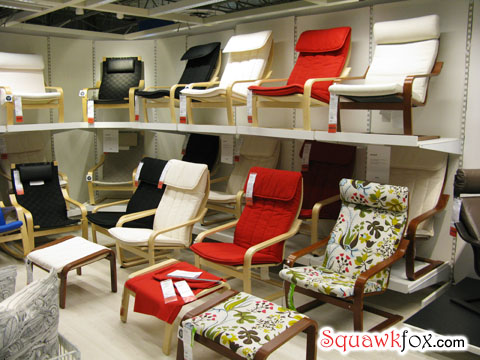 Pick a POÄNG: The perfect respite for frazzled IKEA shoppers.

But beyond the BILLY bookcases and those popular POÄNG chairs lies a dark secret: IKEA, the home of flat-box packaging and compressed particle board, is really a hellhole disguised as heaven.

To get out alive you’ll need a plan of attack. You’ll also need a shopping cart armed to defend against (or take down) any IKEA shopper who separates you from those GLIMMA tea lights. It’s called survival of the fittest, people. I think Darwin mentions IKEA (and GLIMMA tea lights) in chapter three of The Origin of Species. Go look it up.

Anyhoo, before taking a single step in Sweden Way, get real to the survival tactics of the Blue and Yellow. Get familiar with the wily money-parting ways of the Swedish. And learn how to enter (and exit) IKEA with your sanity, soul, and marriage still intact, all without resorting to pepper spray.

This is The Definitive 12-Step Guide to Surviving IKEA:

1. Measure thrice. Freak out once.

Before stepping outside your home, do yourself a solid and measure everything your prospective IKEA furniture is supposed to touch. Measure wall height, floor space, doorway girth, and the length of your dog’s tail. Heck, measure everything three times (using both imperial and metric systems) just to be certain your new PAX unit won’t graze the ceiling when fully erect. True story.

Swedish Translation: A happy guy with a pencil will draw an ‘X’ over you.

If you’re in IKEA and some ‘Swedish Bedroom Specialist’ hands you a paper ruler to see if that sexy SULTAN mattress fits in your 300 square foot micronized Vancouver apartment, forget it — you’re already f-cked.

Measure ahead of time, and you won’t face the hell of re-flatpacking a partially assembled bed frame ’cause it just don’t fit. True story.

You will totally ignore this essential tip. I know this because it took me no less than 25 IKEA trips before I grew a Swedish brain, used the IKEA website, and created the perfect IKEA shopping list online. You’ll stay on budget, avoid getting lost in picking zones, and know when your child’s SNIGLAR is in stock. 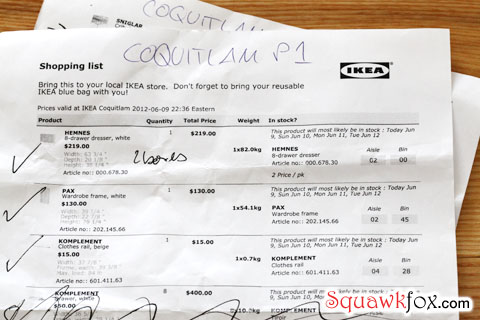 Listed: IKEA product name on the left. Stock aisle on the right. Win.

The IKEA shopping list feature — appropriately named (in English) My Shopping List — is free to those who care about avoiding dehydration and mental breakdowns. Sort by Position in self service area and you won’t die a slow death searching for the second (and third) boxes that will eventually build your BRIMNES wardrobe.

If you want your spouse to divorce you, by all means take a day trip to IKEA on Saturday. Your marriage won’t survive beyond the Market Hall — the perfect place to negotiate who gets custody of the kids on Christmas. 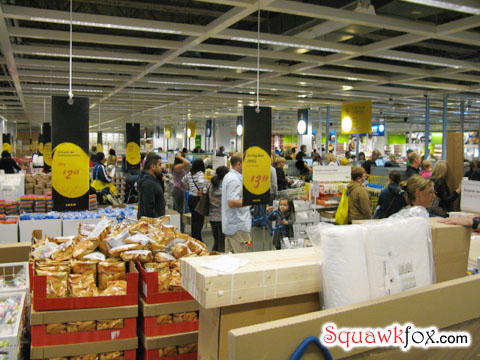 For everyone else, avoid IKEA like the bubonic plague on weekends. You don’t need the plague (or the hordes of crowds carrying the disease), so aim to shop early in the morning on weekdays, or Friday late at night.

4. Dump your kid in SMÅLAND.

Let your kid get pelted with plastic balls in SMÅLAND — a child-approved zone where youngins’ get acquainted with the antics of other angry IKEA children for one hour. Your spawn will love the pit of death, the frightening forest creatures (made of nylon), and the brilliant IKEA marketing designed to mold their brains into future Swedish shoppers. 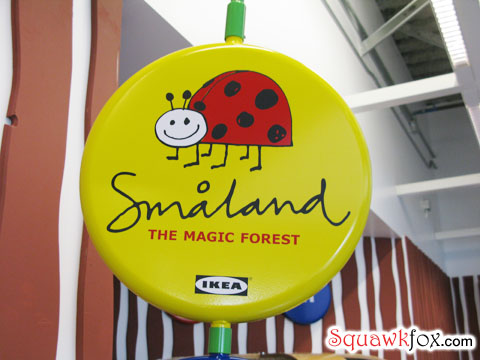 To qualify for SMÅLAND entrance, your child must be unwilling to hike through 500,000 square feet of retail *cough* utopia and measure up to the right height. Your child may also qualify for chicken pox if she comes into contact with a spotted kid named ‘George’. True story.

Anyhoo, since you only get an hour of child-free bliss, grab your GROGGY and run.

With your shopping list in hand, make a bee line to the budget zone called the AS-IS department — located in the basement, where the smartest of IKEA shoppers are never lost, and always found. 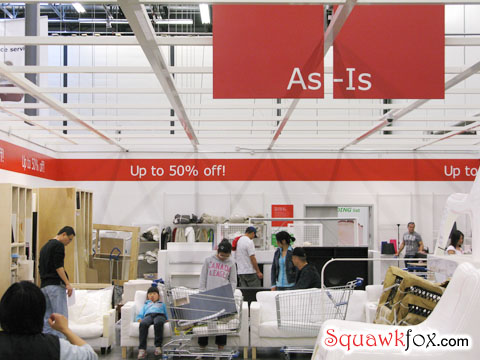 The AS-IS department often sells assembled floor models and flawed merchandise (sometimes only the unpacked box is damaged) at deep discounts. Avoiding the upper floors, Market Hall, and the self-serve zones is key to survival, and you’ll bank a few extra bucks if your bookcase or slip cover is sold with a discounting blemish. Head straight for the checkout. You win.

6. Avoid the path of most resistance.

Walk like a Scandinavian and you’ll end up following a maze of floor arrows designed to keep you lost in a sea of shoppers forever. 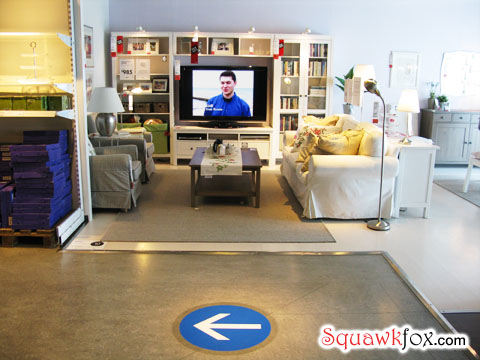 Make the rookie mistake by becoming entranced by these one-directional markers and you’ll get stuck behind every pregnant couple stopping to fawn over some swoon-worthy thing along the way. You’ll grow to hate these cute baby mooning, perhaps newlywed pairs, and either spontaneously combust or graciously gnaw on your IKEA pencil.

If you own a dental bite guard (or any protective mouth device) now is the time to insert it into your gob to prevent the onset of a pressure-induced migraine and molar wear. Also, pray that the pretty pregnant lady needs to take a pee break.

Avoid the lemmings and the herd mentality by printing an IKEA floorplan and marking the shortcuts, elevators, and bathroom zones where you can breathe easy and dash away from those determined to dawdle.

7. Replenish, but not at noon.

IKEA’s restaurant and cafe can be the perfect stop for the weary. Enjoy super-cheap salads, salmon, and of course IKEA’s world famous meatballs smothered in lingonberry sauce (only $5.99). 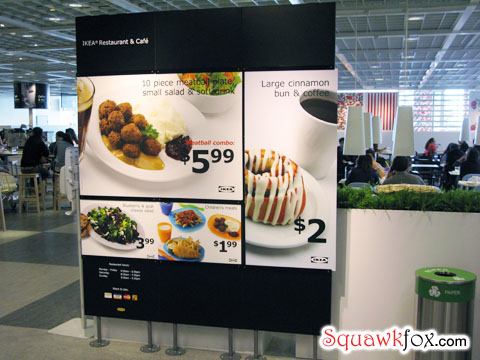 Choose to dine at noon and get whacked in the head by a pissed off kid who just learned that the Swedish Chef failed to stock chocolate milk today. You’ll curse his exhausted parents for not dumping the brat in SMÅLAND.

College students tend to fall hard for IKEA products with ridiculous names. I once bunked with a dude (we had separate rooms, thank you) who bought the FARTFULL — a now discontinued children’s workbench — because the gassy product was named ‘fart full’. True story. 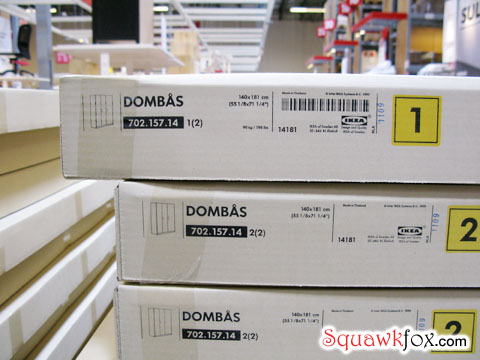 On my last IKEA trip I noticed a horde of young (and dumb) bored men snickering over the DOMBÅS — a simple wardrobe. I think IKEA gives certain products dumb-ass names to entice certain dumb-ass demographics into buying, and bringing home, the dumb-assery. Maybe. 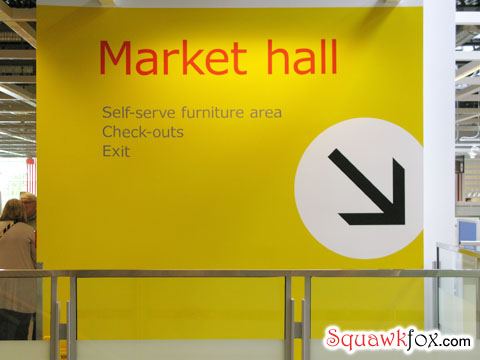 Designed to part you from your pocketbook faster than a pissed off husband looking to launch in search of beer (or Ativan, or the bubonic plague) is IKEA’s Market Hall. Women love it here. Men coil in mortal horror. 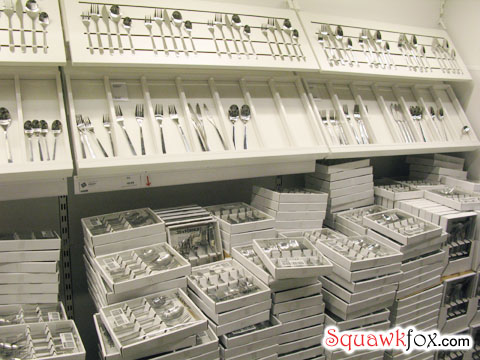 She will pick five 8×10 RIBBA picture frames (they’re only $9.99 each), two BLOMSTER vases (perfect for the flowers he’ll never buy her), and one SNITSNIG saucepan with lid. She’ll then return half the haul, only to repick it five minutes later.

After being dragged mercilessly through the CHARMIG 20-piece flatware set display, past three RATIONELL bins, and through a wall alive with bamboo shoots, he’ll ask her to return everything minus the BLOMSTER vase, ’cause he likes the bamboo shoots — they’re cool. 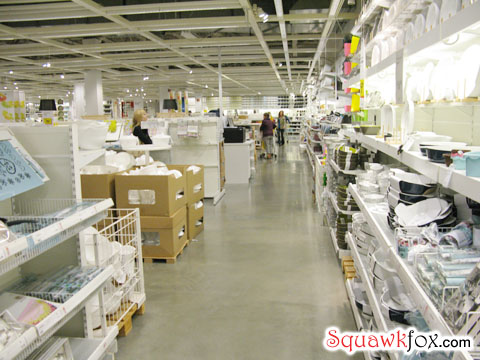 Save yourself. Save your relationship. Save your money. Avoid the Market Hall by sticking to your shopping list. But get the BUMERANG curved clothes hangers ($5.99/8 pack) — best deal on wooden hangers anywhere.

The delicious cheese at the end of the IKEA maze is the 75-cent hot dogs and the frugal frozen yogurt cones. But you’ll have to make it through the self-serve zones and checkout lines before dining on your dollar foods.

If you sorted your Shopping List by Position in self service area (like I told you to), you’ll breeze through the sky-high stacks of boxes without blinking an eye. Kudos. 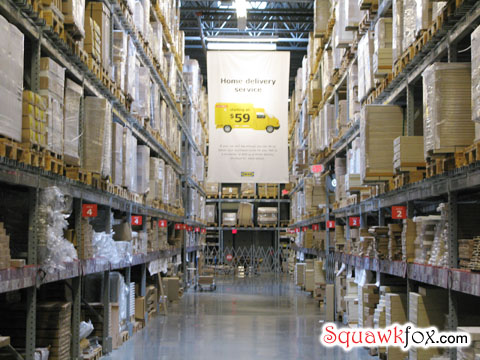 Ignore my sanity-saving tip and you’ll be forced to walk for miles in aisles of cardboard in search of The Lost Ark. Indiana Jones didn’t endure such pain.

Swedish sales clerks are of little help down in these dark cardboard alleys of hell since most only visit the basement on their breaks to dine on 75-cent hot dogs and tasty frozen yogurt. 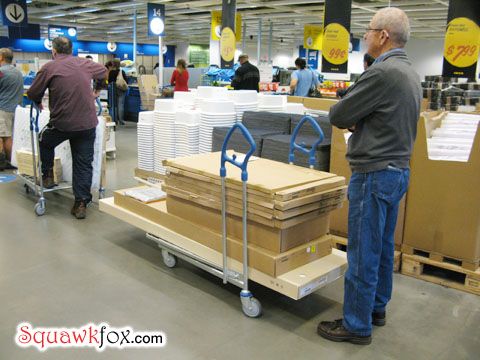 Haul your loaded cart and wait in line with fellow frazzled shoppers for at least 45 minutes. Curse the kids just freed from SMÅLAND. Stare at the IKEA staff scarfing down 75-cent hot dogs. Curse all the seniors licking frozen yogurt cones.

Blocking the loading dock with your Smart Car and attempting to Jenga the smallest of boxes on board will get you pelted with meatballs by irate IKEA shoppers. The yogurt-licking seniors will join in for good measure since you’ve boxed in their getaway tour bus and they won’t make it home in time for Jeopardy!, or Bridge. 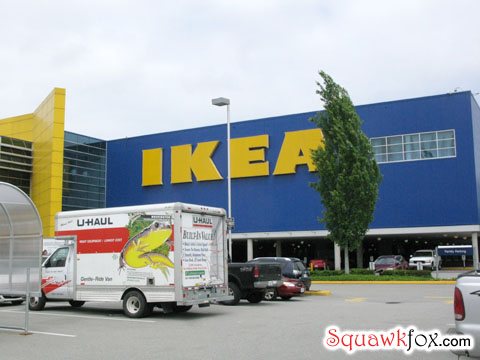 So before beating it to IKEA in your commuter car to avoid the bubonic-infested crowds, calculate the package size of the particle board you wish to purchase, and drive an appropriately sized vehicle to haul your s$it home. Heck, bring a U-Haul just to be safe. IKEA should rent U-Hauls to over-zealous shoppers. Seriously.

Husbands and other full-grown men will want to be heroes by building and raising all flat-packed furniture into usable three-dimensional home furnishings. All men will be mistaken. The only humans able to decipher IKEA’s DIY pictorial assembly guides are children, and you probably forgot yours in SMÅLAND during the mad dash to exit the showroom. 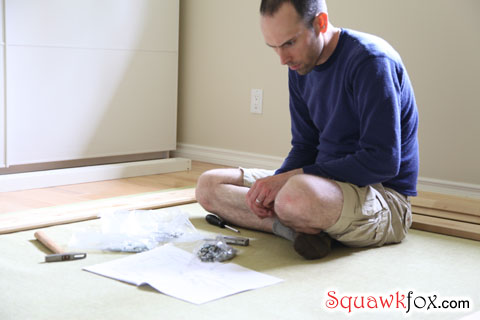 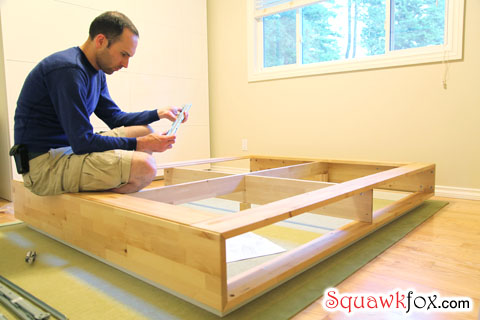 Evening (next day): Carl found the missing bolt. He was sitting on it.

It will take at least 10 hours to build that PAX storage unit, and all you’ll have to show for it is some blue covered doors hanging on an ill-secured hinge. True story. 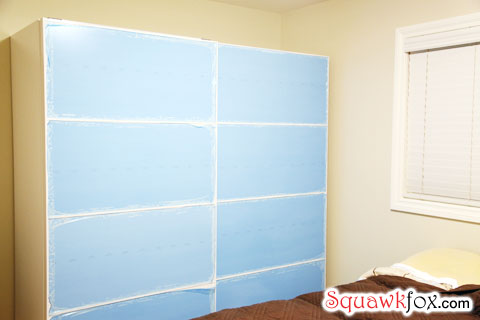 You will come unhinged. You will curse in Swedish. And you will return again in the future (mostly) to buy something to sit on. Face it people — shopping at IKEA is awesome. 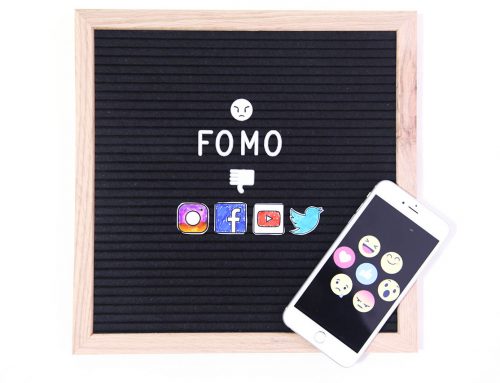 How social media and FOMO wire you to spend money 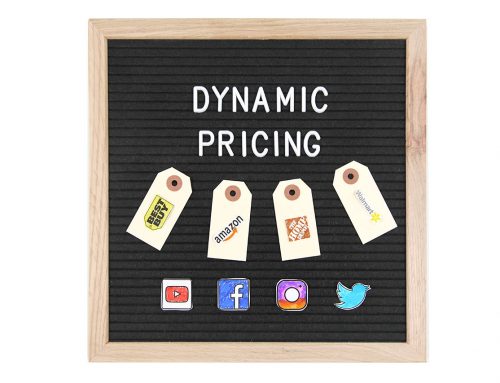 How not to get duped by dynamic pricing 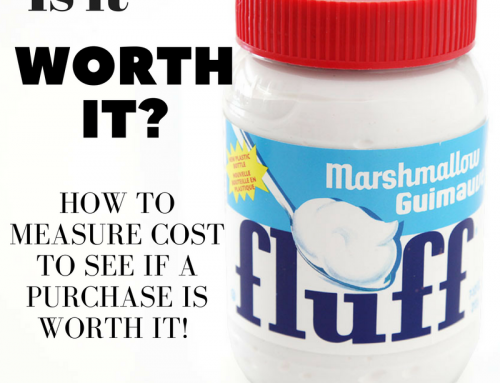 Is a purchase worth it? Measure cost in terms of hours worked 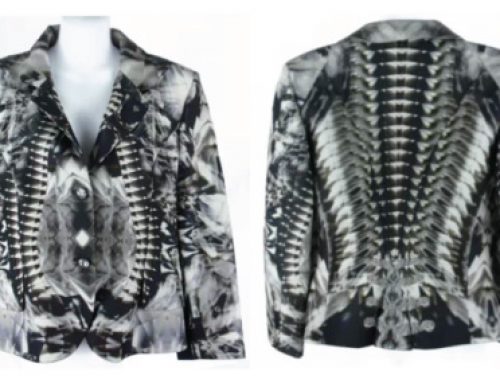 Impulse buying is the misfortune of The Saver

Canada Goose Jackets — Is it worth it?