What Order Should I Pay Off My Credit Cards?

If you’re juggling balances across multiple credit cards, chances are the way you’re repaying your plastic is costing you.

If you can’t pay the balance for all cards in full each month, optimizing your payments with some simple math is the best plan – you’ll pay the least interest and save the most money. Start by paying the minimum monthly payment on each credit card, and then work to pay off the card with the highest interest rate first. 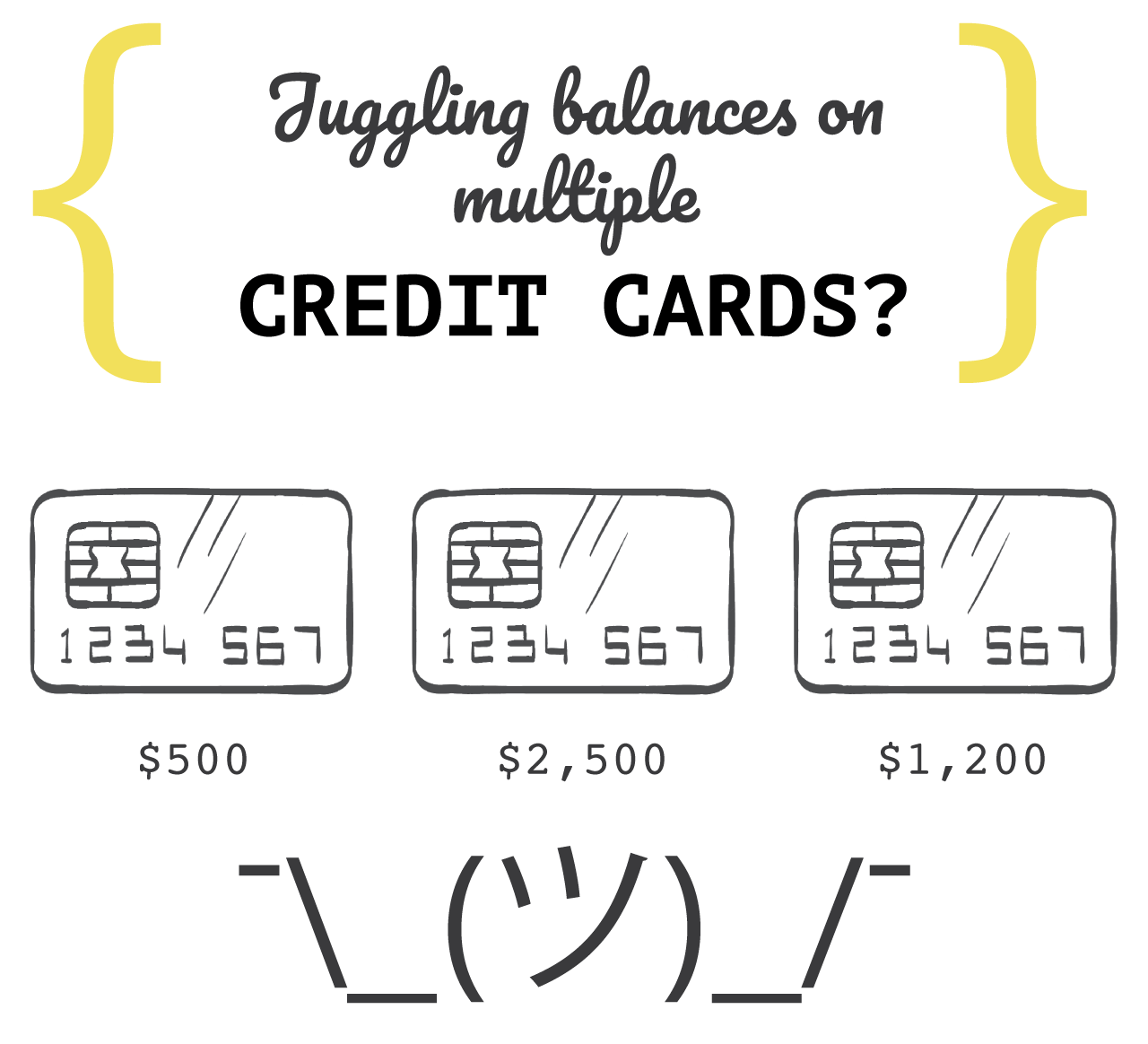 In a study from the National Bureau of Economics Research, researchers found people fail to use good mathematical sense with their credit card repayments because they tend to ignore interest rates.

The study found the average two-card household in the UK paid an extra $90 a year in interest because of how they divided their repayments. The most indebted households with over five credit cards paid $1,000 per year in unnecessary interest, which could have been avoided just by focussing on repaying the highest interest cards first.

While some people aim to pay off the smaller debt first for a psychological win, researchers found the majority overpaid in interest by “balance matching” debt repayment. Whaaaat?

Balance matching? Throwing math and logic aside, this is where individuals make payments in proportion to the overall amounts owed. For example, let’s say you owe $5,000 on one card and $2,500 on another and you have $1,200 to put towards your plastic this month. Researchers found the average person would pay $800 on the larger balance and $400 on the smaller one without considering interest rates or the cost of compounding debt. 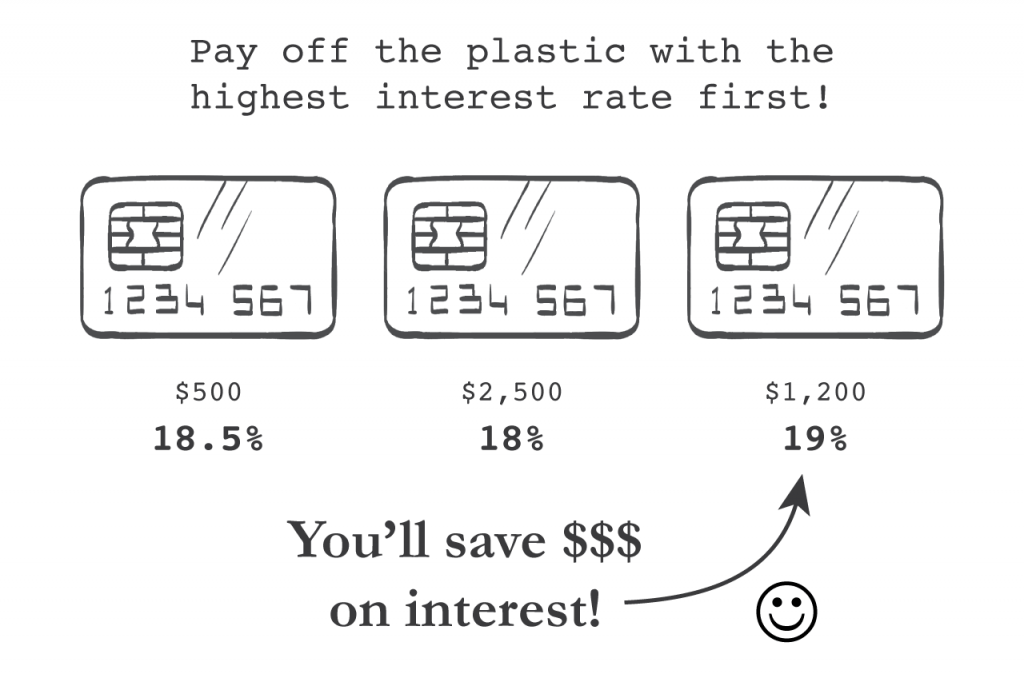 It’s not that we want to overpay in interest, but the study found our human brains are susceptible to making logic errors in part because credit card balances are the first numbers we see on statements. This total amount owed often weighs heavily on our minds and affects our decision making process when deciding payment amounts.

Don’t get ‘Anchored’ on minimum payments

Another big mistake we often make is focusing on minimum payments and paying JUST the suggested minimum every month. Don’t. It’s a psychological trick designed by credit providers to extract maximum interest from you as possible, maybe even years.

Behavioral Economists often call prominently written numbers, like the minimum payment on your credit bills, an anchor. Anchoring is a cognitive bias where our human brains rely too heavily on the first piece of information offered (the anchor) when making decisions. So many of us see the minimum payment anchor, focus on it, and view it as the correct amount to pay. Question: Why would you ignore the advice offered by a prominent number? Answer: It’s a manipulative trap.

[Related Study: Avoiding the Anchor: An Analysis of the Minimum-Payment and 36-Month Disclosures Mandated by the CARD Act and How to Improve Cardholder Repayment Patterns]

A 2017 study by TransUnion Canada found that while 47% of Canadians pay off their credit cards in full each month, 39% are uncertain about the benefits of paying off more than the minimum balance, and 10% pay exactly the minimum required each month.

I wrote about the very costly mistake of credit card minimum payments in Are you paying just the minimum balance on your credit card? — yes, go read for a wake up call. (I’m here to help!)

Look, I’m a fan of keeping on-side with creditors by keeping up with minimums, but letting the card statement convince you the minimum is the maximum required is costing you a lot. 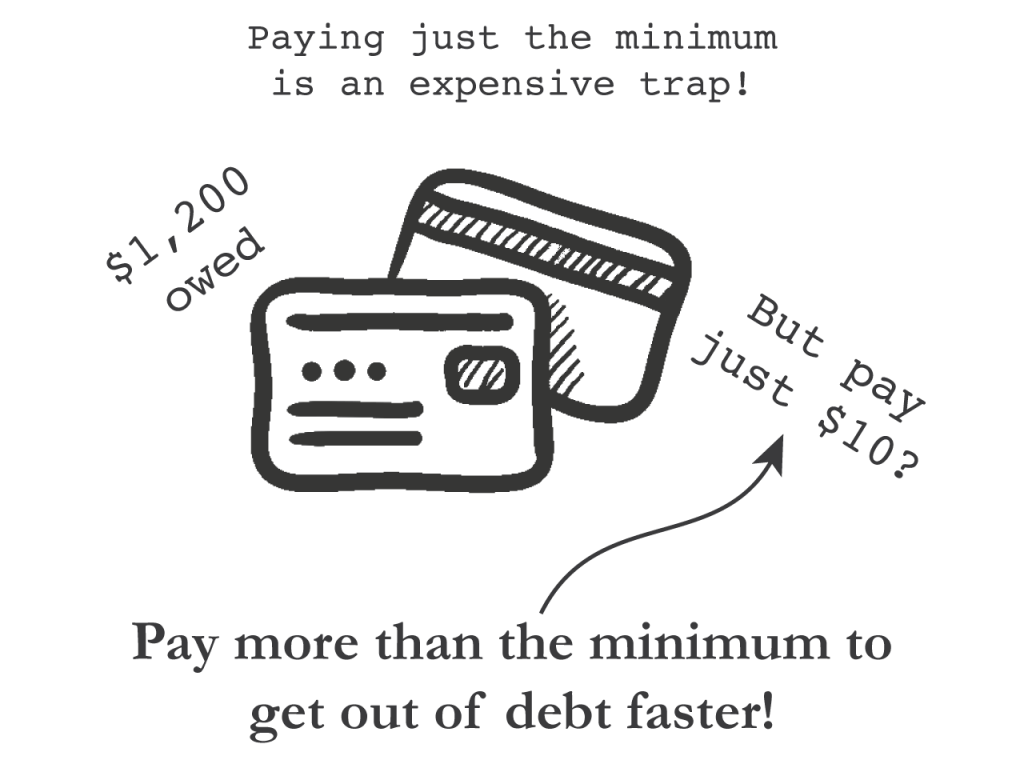 Want to really kill that balance and save on interest? Let’s ignore the banker’s suggested minimum and pay a fixed amount of $100 every month.

By paying just $25 more over the suggested minimum payment of $75 each month, you’ll pay off your credit card balance 13 years and 11 months sooner, plus you’ll save $2,101 in interest. The total interest paid is $760, plus you’ll get out of debt a decade sooner. No wonder banks love it when you pay just the minimum.

The bottom line is to get out of debt the fastest with the least amount of interest, you must strategically pay off your credit cards by repaying the cards with the highest interest rates first, paying more than minimum amount. The math is really that simple.

Check out my Debt Reduction Spreadsheet for inspiration to go beyond balance matching and minimum payments. Not only can you save thousands in interest, but you’ll be free to focus on life after plastic balances.