Call Me Maybe: Why my $783 unlocked iPhone is a ringin’ deal

Most people would never pay $783 for a smartphone. I’m not most people.

After crunching the subsidized cell phone math and multiplying the mobile contract costs, I came to the conclusion that buying an unlocked iPhone 5 outright from Apple with zero ties to any contract-wielding carrier is a ringin’ deal.

What’s an unlocked phone? An unlocked cell phone is not tied to the carrier you bought it from and can be used with most mobile carriers anywhere in the world by swapping something called a SIM card. I explain this process below, so no worries. 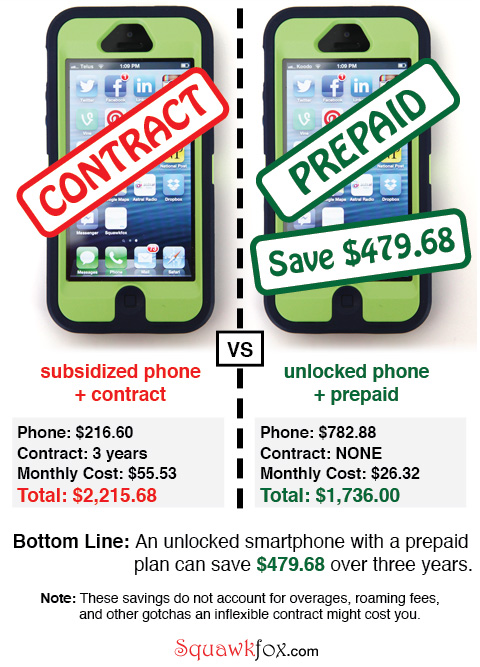 While the math uses the numbers from my situation — I’m a Canuck, I use data sparingly, I travel — I think the logic can be applied to your lifestyle, wherever and however you live.

Since this blog is about being a smarter, less spendy consumer, I’m going to walk you through my decision to spend a whopping $783 on a freaking smartphone. Your milage may vary.

I have happily used my relic of a cell phone for the past 7 years, and I wrote about resisting the call of new phone technology in Do you really need that upgrade?

While I’m awesome at delaying gratification, there comes a time when technology becomes unusable, deprecated, or broken. The world (and internet) have changed drastically since I starting using my 2006 candybar cell, and not being able to text friends, check my email, or do bloggy-related things online made my old phone a major liability.

iPhone, Android: So many smartphone choices!

So why choose a costly unlocked iPhone 5 16GB model over something less expensive, like the unlocked Google Nexus 4 16GB? Simple, I wanted an iPhone. 😀 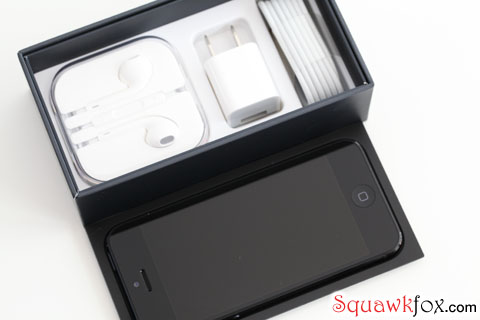 I love working in the Apple ecosystem, and spending more for an operating system, the applications, and hardware I prefer is worth it to me. This was also a budgeted spend, so I spent some time saving for the upgrade.

Bottom Line: My unlocked iPhone 5 16GB cost $699 + 12% tax = $782.88CDN. Before pulling the trigger on a shiny new smartphone, do yourself a solid by researching the features you can’t live without, the cost you can afford, and compare the options in the marketplace — you could save some money if a lesser model works for you. Tutorial: Which phone should you buy? | CNET.

2. With no costly contract, I can quit you!

I have a few reasons for being cell phone contract averse. First off, Canadians have the world’s longest mobile phone contracts — sign up for a subsidized phone with one of the big three carriers (Bell, Rogers, or Telus) and expect to be on the hook for three long years.

Need to move, lose your phone, or want to upgrade? Good luck! Contract termination fees can cost you hundreds, even if you’re staying with the same carrier.

Also, with so few carrier options, studies show that mobile service in Canada is overpriced and anti-competitive. Americans don’t have it cheap either. The most recent Open Technology Initiative (OTI) report compared cell phone prices and packages across the globe, and found US mobile customers pay the world’s second highest rate of $59.99 for a complete cell phone package. Canadians are the big losers in the mobile space, paying a chart topping $67.50 for voice, text, and data plans. Wheeee!

Being dialed in and handcuffed to a contract and carrier was never my preference, but I still ran the numbers using the tools that have saved me money over the years — my brain and a spreadsheet.

Mobile nerds can open my mobile cost comparison spreadsheet, but I’ll just tell everyone else the results. After comparing the cheapest cell plans offered by Rogers, Telus, and Bell, the numbers were so uncompetitive and similar that averaging a price with a subsidized iPhone 5 was so easy-peasy, it kinda made me queasy.

I then compared the monthly cost of going prepaid (aka Pay-As-You-Go) with PC Telecom and Koodo Mobile, a subsidiary of Telus with plans that let you carry-forward unused voice and data balances. 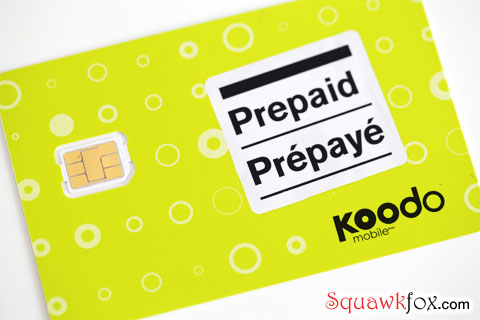 After pricing out SIM cards, base plans, and calculating data needs, my preference went to Koodo Mobile for flexibility and a low $26.32 per month cost. The ability to save unused balances appeals to my squawky senses.

Bottom Line: After doing two basic mathematical calculations known as addition and multiplication, I came to the conclusion that opting for a prepaid plan could save me nearly $30 per month, or just over $1,000 in monthly fees over three years. Going prepaid with an unlocked phone also gives me the flexibility to swap SIMs and switch providers if a better deal comes to town. Tutorial: Step-by-step Guide: How to Save Money on Your Cell Phone Contract | Young and Thrifty.

Since I want you to get mobile and research your own scenario, use my free compare cell phone plans spreadsheet to help you calculate your total talkin’ and textin’ costs.

I’m into sharing the savings ’cause I’m cool like that.

Use your cell phone outside your local area or travel to another country, and you’ll likely get whacked in the wallet by crazy high roaming charges. Bell Canada issued this Canuck a $9,350 data roaming bill after his visit to Israel, but excessive smartphone roaming fees can happen during quick jaunts to neighbouring countries too.

It’s no shocker that Canada is known to have some of the world’s highest roaming rates. Americans may have greater choice in the mobile market, but there are cases where roaming Yankees got stuck with a $10,000 phone bill too. Heck, this Verizon customer racked up a $1,500 cell phone bill in 12 days thanks to a little travel. Not awesome.

Local SIM cards and unlocked phones can save you money.

There are a number of ways to beat roaming fees while traveling abroad — my favourite method is to buy a local SIM card for my unlocked phone and use that region’s cheapest prepaid phone plan while on the road. 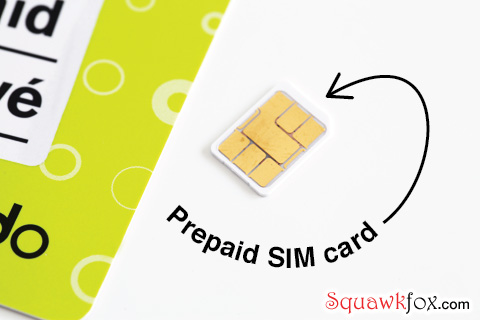 A SIM card is a small, thumbnail-sized chip that stores your phone number and personal information. When your cell phone is not locked to a specific carrier, you can easily switch networks by swapping the SIM with one from a local service provider and avoid exorbitant roaming charges.

Bottom Line: It’s hard to calculate my total roaming savings at this early stage, but I think it’s fair to say that my $783 unlocked iPhone 5 can potentially save me hundreds, even thousands, in excessive roaming fees since I have the flexibility to pop my SIM and access any local network in the world. Tutorial: Stay in touch without racking up big wireless bills | Consumer Reports.

So there’s this terrifying thing called bill shock. It happens when you unknowingly go over your plan’s voice or data limits and your provider charges you dearly for the overage, without warning. The shock part happens when a defibrillator is needed to revive your body after your brain realizes the financial impact of that massive cell phone bill. 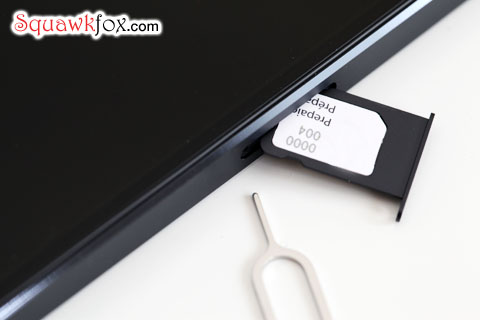 I have every reason to be terrified of bill shock, especially since Canadians have little protection and warning when they’re set to hit data limits. Heck, Canuck wireless providers question the need for ‘bill shock’ protection — this despite the Federal Communications Commission (FCC) putting pressure on mobile carriers to adopt ‘bill shock’ warnings for Americans back in 2011. Guess what? The FCC won.

By April 2013, more than 97% of American wireless customers will get automatic usage alerts when consumption of data, voice, text, and international charges approaches or exceeds plan limits.

I think Canadians should be grumbling. Now grumble louder.

Prepaid phone plans are akin to fuelling up your car at the gas station — you know exactly how much you’re paying up front, and you are given fair warning before the juice runs out.

So why do people balk at topping up a prepaid plan when they’re consuming more data? I love ‘paying as I’m going’ since I’ll never go over my limit, I find it easier to stay on budget, and those dang mobile carriers can’t zap me with bill shock.

The challenge is finding a competitive prepaid plan with a locked phone. Good luck with that.

Bottom Line: Paying the big bucks for an unlocked cell phone and opting for a prepaid plan can save you money by helping you to stick to a usage limit, capping spending, and avoiding the dreaded bill shock.

Before dropping $783 on my brand new unlocked iPhone 5, I searched a slew of online classified sites to see if a used unlocked iPhone could be had for less. Wading through the used locked iPhones was a hassle, especially since most were being sold with a 2-year contract still attached!

After nearly laughing my a$$ off, I discovered that gently used unlocked smartphones are pretty decent at keeping a high resale value. I had no luck finding the phone I wanted though. Oh well!

Bottom Line: Selling an unlocked smartphone is far easier than one locked to a carrier. If you like upgrading your mobile gadgets often, choosing to pay more up front for an unlocked device could save you a bit of money since the resale value is decent.

Most people would never pay $783 for an unlocked smartphone. But maybe more people should? After adding up contract costs, comparing unlocked and subsidized phone options, fearing bill shock, and popping SIMs to avoid roaming fees, I think maybe it’s time to rethink how we buy cell phones. 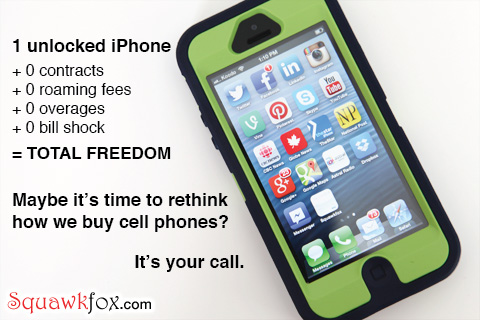 Given my cell situation I’m set to save a minimum of $480 over the next three years by paying $783 outright for my fancy unlocked iPhone 5. And these savings do not account for potential overages, roaming fees, and other gotchas an inflexible contract might cost.

How much would you have saved by ponying up the cash for that pricy cell before locking into a lengthy phone plan with a greedy service provider?

Maybe it’s time to do the math.