Is Dollarama’s $3 HDTV antenna worth it?

I was at the playground watching my kid play on the ground when I struck up my favourite conversation with my friend Nadine. No, we didn’t talk about panties, or Value Village, or why you should never buy someone else’s panties at Value Village.

We chatted about cutting cable television. The conversation may have gone something like this:

Nadine: Me too! I use an HDTV antenna to watch cable channels for free.

Nadine: SIXTY-SEVEN BUCKS? I got mine for $3 at the dollar store and get up to nine channels.

Me: WHAAAAAAAAT? I either love you or not. Hook me up with your dollar store, I’m feeling squawky.

A $3 HDTV indoor antenna from the dollar store? I couldn’t build a homemade TV antenna for that cheap. I should know, I’ve tried with slightly quirky but mostly humiliating results. My daughter calls this one “The Owl”. I call it “The Hideous”. 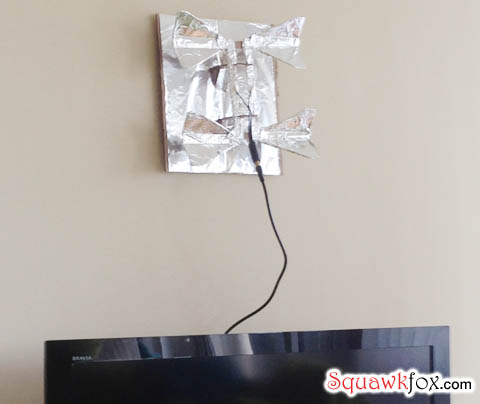 Then there was my attempt at making a more “streamlined” version. This one got dubbed “The Space Invader”. 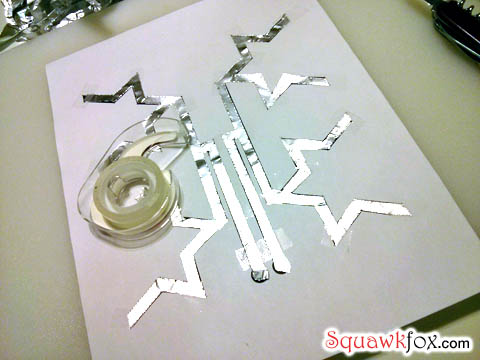 Both DIY TV antennas worked perfectly well, as long as Carl held it while I leaned out the window with a raised hand and a bent knee that either resembled a sad pink flamingo or a poor interpretation of that 80s Bangles hit, Walk like an Egyptian. Both attempts made the option of just paying for cable television look a lot less ridiculous. And both antennas got me just two free over-the-air (OTA) HDTV channels.

So a dollar store HDTV antenna seemed a perfectly sane option in comparison. Could Dollarama’s $3 HDTV antenna compete with my $67 higher-end model? 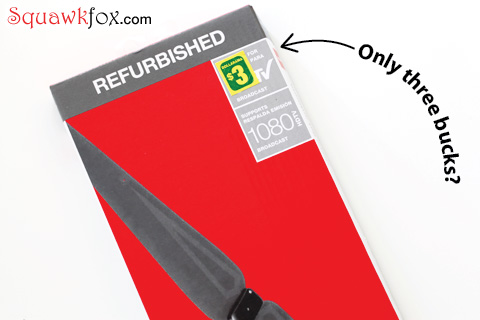 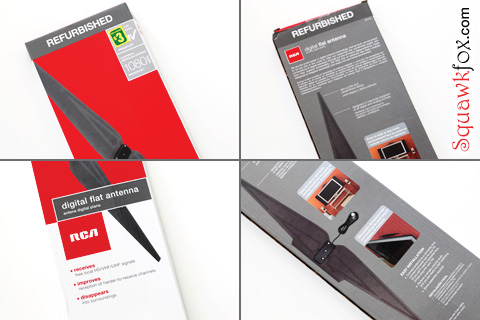 I was totally into it. Nadine was into it too — so she bought me one. 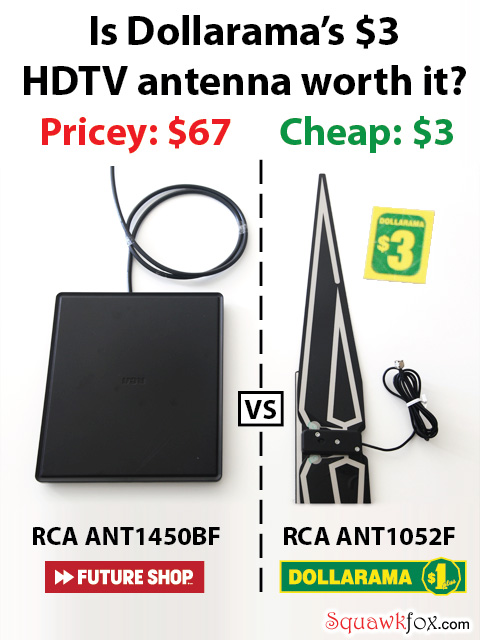 Now I’m the first to admit this is not a scientific study of cheapo TV antenna performance. I would love to outfit The People Across Canada (ok, let’s not limit ourselves here, let’s aim for The People of The World) with $3 HDTV antennas and have them report back with the results. Not gonna happen. So let’s just enjoy my antics for what they are — a mostly thrifty attempt at watching TV for free with a humbling side of curiosity. Now let’s get on with it.

Setting up the $3 RCA HDTV Antenna

STEP ONE: Unpackage The Promise. Unboxing the $3 Dollarama antenna was fun. The unit is labelled ‘refurbished’ and looks very similar to this $20 RCA ANT1052F Digital Flat Antenna. 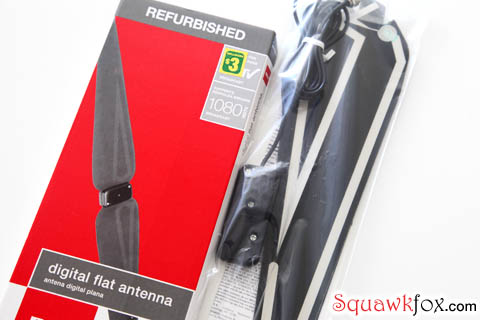 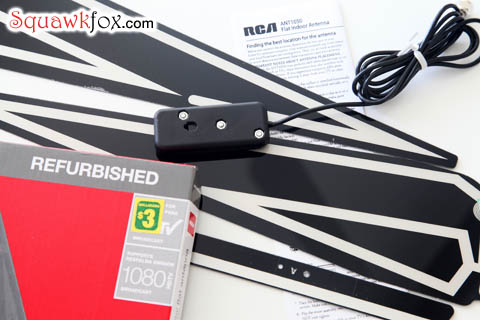 Dollarama’s indoor TV antenna is basically a flat plastic thing with a coax cable that resembles something only Batman would love. The packaging promises free local HD/VHF/UHF signals and improved reception of harder-to-receive channels with the ability to “disappear into surroundings”.

My current $67 RCA ANT1450BF Multi-Directional Amplified Digital Flat Antenna was bought at a local tech shop. This model is a little black monolith with hints of 2001: A Space Odyssey. I’d crack it open, but I doubt it’s full of stars.

STEP TWO: Assembly. I grabbed my Phillips screwdriver, followed the instructions, and assembled the “antenna wing sections” together. 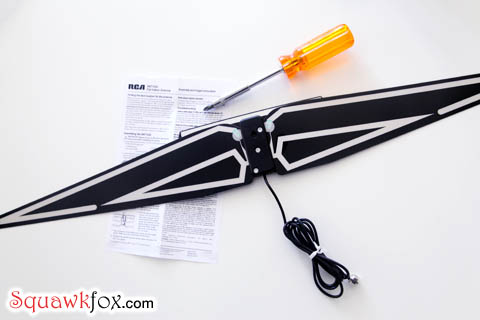 Be sure to remove the protective plastic coating from the wings if your refurbished model is coated. Despite being the caped crusader, Batman can’t operate at full capacity with plastic coating — everyone knows this.

STEP THREE: Installation. I’m trying to come up with a simpler way of saying: “I then plugged the $3 Batman-like antenna into my television” but the operation was really that simple. 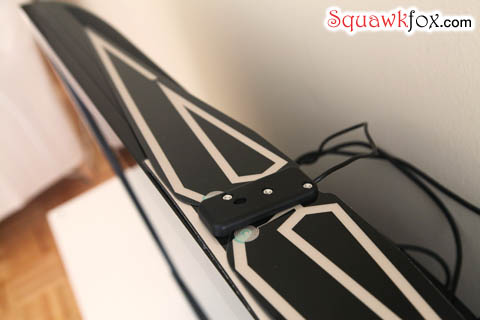 Notice how Batman neatly disappears into the surroundings? In comparison, my $67 black monolith looks like an unsightly box strapped to my wall. I don’t have a picture, but revisit “The Owl” photo and imagine a black box hanging there. So far I’m voting the $3 Batman antenna the aesthetics winner.

Now for the real test — the channel scan. Does Dollarama’s $3 HDTV Antenna capture as many (or more) channels as my $67 indoor model? 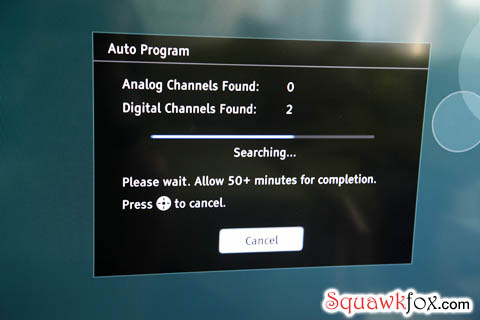 And the winner is…? 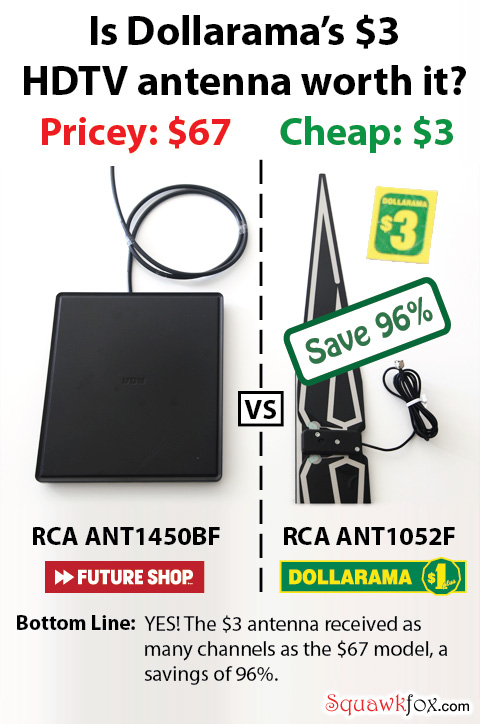 More Bottom Lines: Yes. Dollarama’s $3 refurbished RCA HDTV indoor antenna scanned as many watchable, clear picture, OTA digital channels as the pricier $67 model. Since the $3 antenna represents an astonishing 96 per cent savings AND vanishes away from sight, I’m kicking myself for not chatting with moms at the playground sooner. Let’s all thank Nadine, OK?

So where I am going with this?

Sadly, not far from my living room because that’s where the strongest OTA signal is in my apartment. And that’s kinda the point with catching free OTA airwaves with an HDTV antenna — it’s generally more about your proximity to the TV transmitter than the price of your TV antenna. Results will always vary.

Those watching television in concrete basements might get zero channels while those living in high rises with unobstructed access to TV tower signals often get dozens of channels. I have a hunch no matter which HDTV antenna you hook up, your reception is going to be determined by location, location, location.

So is Dollarama’s $3 HDTV antenna worth it? “Holy jackpot Batman!” If you don’t want to blow the three bucks and risk no reception, go ahead and research signal strengths based on your location by visiting www.antennaweb.org (USA) or www.tvfool.com (Canada) to find which broadcasters transmit locally, your distance from the nearest transmitter, and the direction to point your HDTV antenna for success.

Now excuse me while I step away from the boob tube for a bit. I have a few DIY TV antennas in need of recycling and a TV drama to write. In my made-for-TV movie “The Batman” handily clobbers both “The Owl” and “The Space Invader” while defeating an overpriced villain, “The Black Monolith”. I also owe Nadine three bucks.

Question: How do you get your TV fix on the cheap?