Some people never venture far from home, while others travel far and wander forever. Me, I’m located somewhere left of center. I’ve always lived in Canada, but I’m no stranger to flinging my life and a few cubic cardboard boxes from Toronto to Ottawa to Montreal to British Columbia everyish decade. That’s around 5,000km or 3,100 miles across country if you’re curious. My moving boxes have always held up. My emotional baggage is torn. 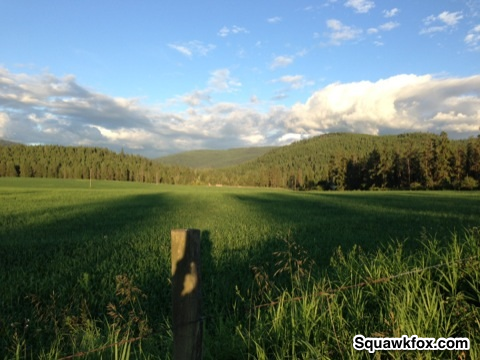 Yeppers! I moved from this gorgeous organic farm in British Columbia to Toronto. BTW: This photo is filter-free.

When I moved to Vancouver from Ottawa 15ish years ago to study computer science (gaw, time flies), I never dreamed I’d stay so long, get married, OMG baby!, and move to an organic farm in the middle of a rural forest in BC’s Okanagan Valley where no one could find me.

Not being found in a forest is great, for a while. Today I’m totally locatable ’cause I moved myself (and my little family) to my birth place — Toronto, Ontario. When I announced my move from a population countable on two hands to Canada’s most populous city on my Squawkfox Facebook Page, the responses really surprised me. 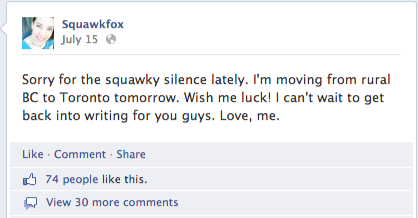 Most of you wanted to know WHY the heck I’d do such a thing! So I’ll tell you.

Here are some of your questions with a few housekeeping answers for the money-minded. I get into the big WHY below.

Carl and I kept our cars in British Columbia. Both my Smart Car and Carl’s Subaru Forester are in storage awaiting our BC return, or until we decide that living car-free in Toronto is unfun. We have a tad of storage insurance to protect against vandals and other jerks, but the cost is minimal at under $200 per year for both automobiles.

In Toronto we’ll “Ride the Rocket”, which is weird advertising-speak for using the local transit system. Subways and buses may be our new normal, but we’ve also joined the Zipcar car sharing program for bigger trips, like to Costco. 🙂

Yes, we’re keeping our little house on the farm. Our humble home is a mortgage-free dwelling, so our costs are not considerable. Insurance, a bit of heating, power, and rural property taxes are the bigger expenses — I’m sure I’ll be surprised by something new next month. The idea of renting out the place is a possibility, but for now I don’t want anyone living in my lovely house.

In Toronto we’re homeowners who rent. Our new city abode is a two-bedroom apartment near High Park. Rent ain’t cheap, but ditching the cars for the subway footsteps away is a decent money saver.

Of course I’m still blogging. The only difference is all things frugal will now be transmitted from Toronto. Many have said they loved my rural mindset and are a little saddened about my city move. To these peops I suggest sticking around — you might be surprised with how a new perspective multiplied with new experiences can equal something interesting. No one has ever said I lack “The Interesting” in my writing. If they have, I tend to ignore them.

So WHY did we leave the frugal farm in BC and move to Toronto? The answers shouldn’t surprise you, too much.

I sometimes get invited to do cool things like speak to groups, squawk on panels, and talk on television, but these things most often happen in Toronto. I’m always choked to say, “Sorry I can’t do it, I live in a BC forest.” Living in the city means I’m able to embrace these opportunities far more often.

Also, the majority of my freelance work — most financial, some technical — is written for organizations and companies located in Toronto. While the internet makes remote work possible, most people like to meet the people they work with. I know I do.

The opportunities for Carl are awesome too. The guy is a computer scientist, so finding challenging work for cooler pay was possible in Toronto. Because compensation (salary + benefits) is often based on location, it’s easier to find work with a competitive salary in larger city centers.

I’ve missed all my reunions, I’ve longed to linger with friends far away, and I have family living in Toronto. I miss the sounds, the smells, and the people living in the big city. I’ve been away in BC for 15 years now, so it’s Toronto time. 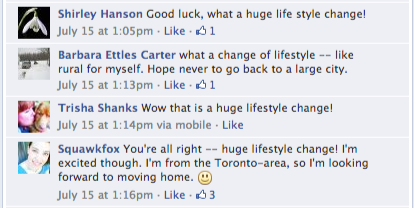 It’s really hard to put a price on “homesick”, but I’m done paying it. I’m home. I guess I have a lot of homes in Canada. Smile.

Adventure is a thing of awesome.

When I first moved to BC eons ago, I did it for the adventure. Big mountains, big sports, big education. I’m not one of those people who grows deep roots or needs to stay put forever. I like to shake things up, sometimes. I can’t think of a more exciting (and challenging) way to boggle my family than to move clear across the country from a farm to a city.

Toronto offers endless places, events, and sights to see. I can’t even begin to list all the city stuff I want to do with my daughter. I’ll probably write about it all later, with a focus on frugality of course.

So there you have it — the BC livin’ Toronto transplant has replanted in Toronto. After announcing my move on Facebook and Twitter I’m super excited about all the coffee dates I’ve been asked on. It’s true I do like coffee, but if you really want to see my fun side then suggest a ‘wine date’ as a get together. Since I’m also from the Okanagan Valley where vineyards are plentiful, I may know a thing or two about tasty bottles, and I always enjoy sipping vino with friends.