Getting kicked outta Walmart was never an item high on my bucket list. But after aiming my iPhone camera at a block of cheddar and telling the price tag to “say cheese”, both my bucket list and shopping list got a lot shorter that day.

The manager guy seemed nice enough when he asked what I was doing. I couldn’t help but state the obvious and tell him the truth. 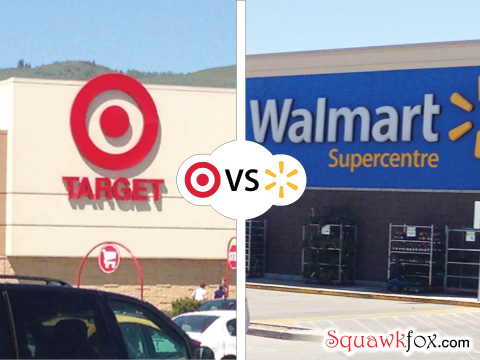 Me: I’m doing a price check experiment to see who’s got the best deals in Canada — Walmart or Target. I’m a savvy Canuck shopper, Sir.

Walmart Manager (aka “Sir”): We don’t allow this.

Me: But everyone has an iPhone, Sir. Well, except my husband — he went Android.

Walmart Manager: No, I meant photos. We’re a little touchy with Target now opening across Canada.

Me: Oh, I was just at the new Target and live Tweeted the grand opening. Super fun! They sell pretty designer scarves and strange mullet skirts. But they don’t have a lot of cheese stocked yet, so I think you’re OK. Look, here’s the photo.

Walmart Manager: You should probably go. Please, no more pictures.

Me: So asking for a managerial selfie is outta the question? This cheese backdrop would look lovely on my blog. […as I walk out of Walmart]

I got a slight ‘case of the sads’ when I exited Walmart. Not because I got busted for snooping and snapping price tags, but ’cause after doing a Squawkfox-style price check experiment I couldn’t totally agree with the Canuck media’s review of the non-existent price war between Target and Walmart. 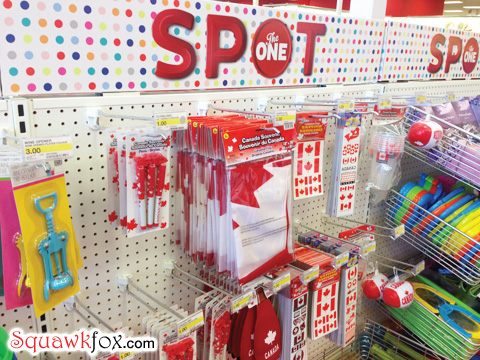 The National Post reported that the “two retailers had an almost identical tally at the cash register on a basket of 29 items” while The Globe and Mail cited a survey that said “Target Canada prices are 0.2 per cent higher than Walmart’s”. 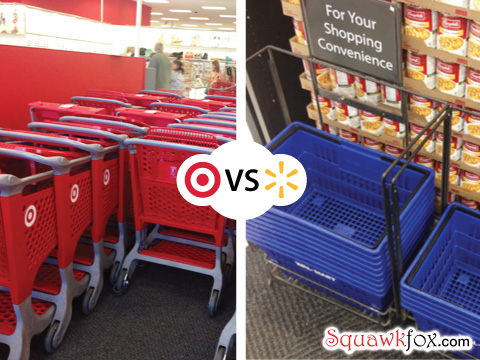 Really? Well, not on my basket of stuff. Do these survey monkeys (AKA “people”) not have kids? Or use coupons? Or care about the awesome that is the Scanning Code of Practice (SCOP)? Do they like mullet skirts and wear pretty designer scarves? Umm, do these people drink coffee?

The answer for choosing between, and ultimately consumerism-ing at, either Target or Walmart really depends on what you need to purchase, what you want to buy, and how you like to shop. The pros and cons of each store can often go beyond price — and this is the BIG POINT the newspapers missed. Coffee break, anyone?

Here’s how to decide if you’re on team red (Target) or team blue (Walmart).

Target vs Walmart: Where’s the deal?

I have three simple rules when I comparison shop on Squawkfox. They are:

These rules came in handy when I blogged Is Costco really worth it? and Are you getting gouged at Value Village? Flunking Rule 3 by getting busted in Walmart was a little awful, but that’s not stopping me from reporting my price check findings to you. 🙂

After shopping a basket of 30 items under the categories of Grocery, Personal Care, and Baby, I found these results: 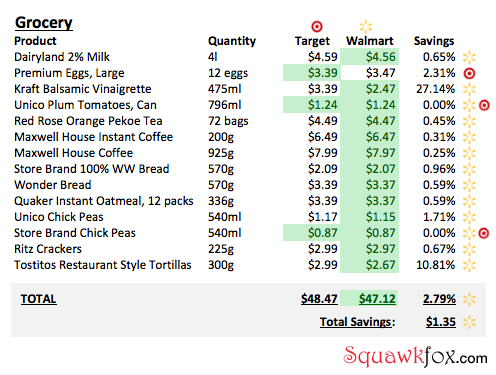 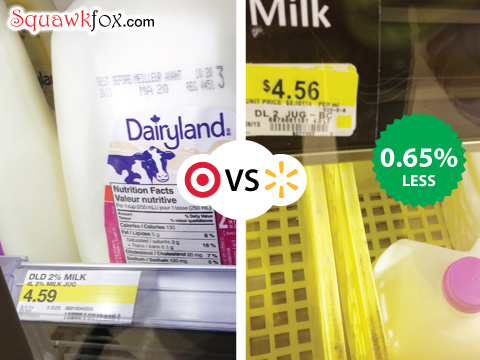 Bottom Line: On a random basket of 14 grocery items, Walmart is the clear *cough* winner with a whopping $1.35 in savings. I’ll give the Canuck media and survey monkeys a pass on this one since grocery items are indeed equally priced at both stores. 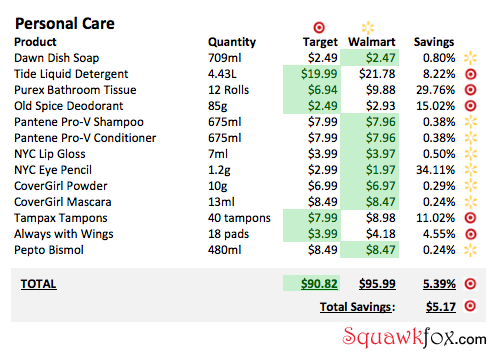 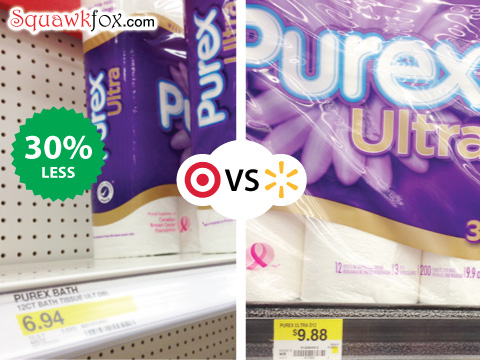 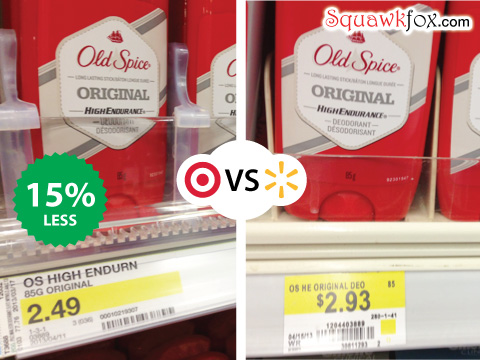 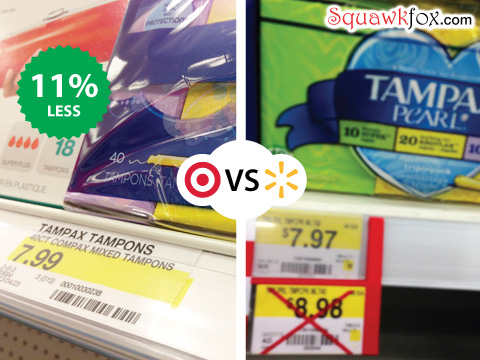 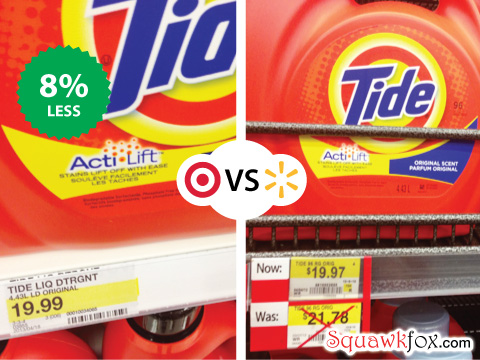 Bottom Line: Stock up on girlie products, laundry detergent, deodorant, and toilet paper at Target ’cause the savings range from 4.55% to nearly 30% when compared to the same stuff at Walmart. 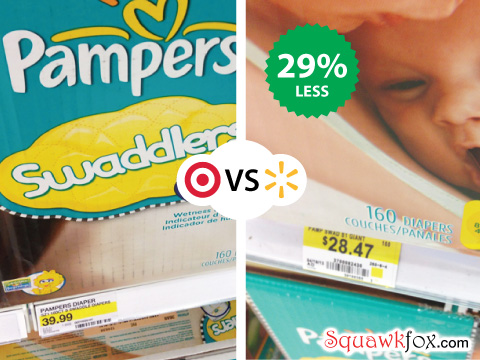 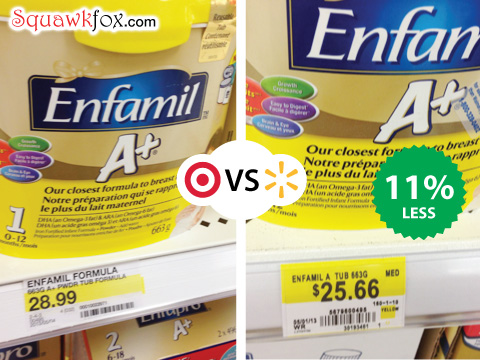 Bottom Line: Babies are expensive little human beings. If you have one or more, do your wallet a solid by shopping at Walmart where disposable diapers, formula, and baby cereals cost up to 33% less than at Target. How did the media miss these stellar savings?

Bottom Line: If you’ve got a kiddlet or toddler in tow you’d save nearly 6% on a $200 shopping cart by skipping Target and hitting up Walmart.

Bottom Line: If you’re livin’ a child-free lifestyle head over to Target where you’ll save 2.67%, that’s a staggering $3.82, on groceries and personal care items.

Target vs Walmart: Reasons to shop at Target

There are advantages to shopping at Target beyond basic grocery prices. I can’t believe I just wrote that, but after shopping for reals at the red retailer I discovered why some shoppers say this store is so special. The price-crunching survey monkeys and media missed these points!

A Missoni zigzag pattern crochet dress will cost ya $2,540 at NET-A-PORTER.com, the “luxury fashion destination” for all the big designers. But skip the glittery glitz and score a “Missoni for Target” designer collaboration dress for $40, and you’re wearing the famed designer for $2,500 less! Plus you can still afford to eat. And pay rent. And maybe buy a matching pair of strappy sandals?

Over the years Target has built highly successful collaborations with top designers Prabal Gurung, Jason Wu, and Phillip Lim (just to name a few) to create consumer frenzies online and instore. Scoring a few fun and affordable fashions under a big designer brand is a huge reason to shop at Target over Walmart — mostly ’cause you ain’t wearing Wu from Walmart. 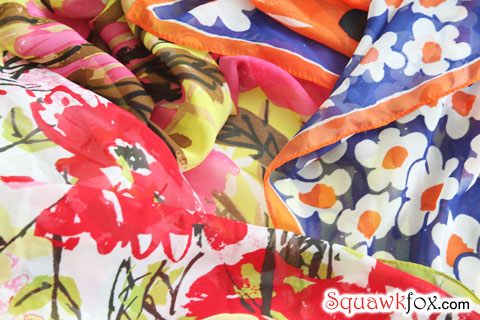 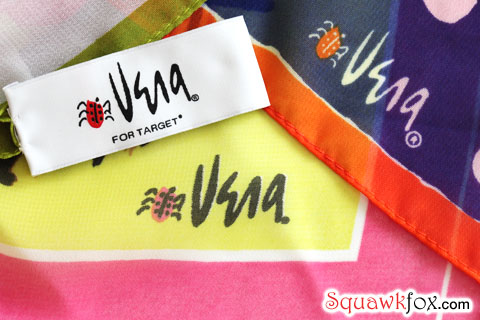 The local Target didn’t stock any super fancy designer labels on my visit, but they did shelve these stunning scarves by American artist Vera Neumann. Sold under the “Vera for Target” brand and priced at $19.99 a piece in both Canada and the U.S., I couldn’t help but buy TWO of these gorgeous scarves for myself and one for my sister-in-law. I also bought milk. So Target wins. 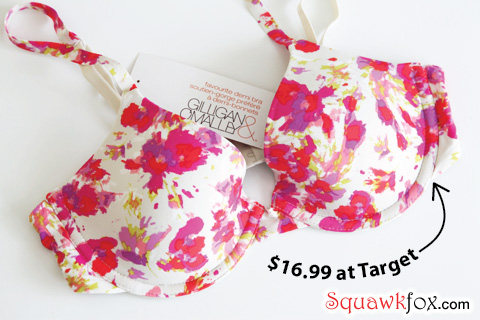 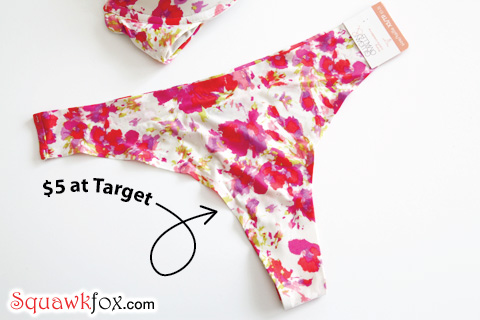 Target also wins for selling unique and interesting clothing some would argue is of higher quality than Walmart. These pretty Gilligan & O’Malley panties sell for only $5 in Canada and the U.S. (a panty steal), and when paired with the matching bra for $16.99 you’ve got a Monet-inspired ensemble costing far less then the stuff sold at leading lingerie stores. And yes, I had a little panty raid and picked up a few pairs for my sister-in-law too. So Target wins again. 🙂

Target Canada is pushing hard for consumers to sign up for their REDCard Debit or REDCard RBC MasterCard loyalty products. The draw for frequent shoppers is an instant 5% off most Target purchases. 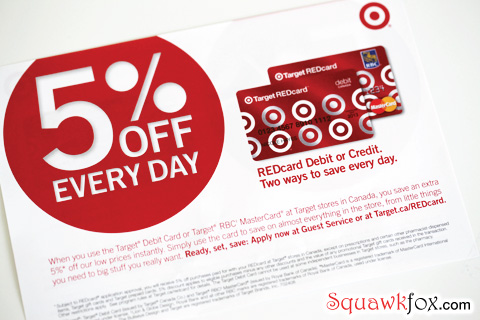 The catch with these no annual fee cards is the $30 hit to your chequing account if you attempt to debit without sufficient funds, and the 19.99% MasterCard interest rate if you carry a balance — both will erode your 5% savings fast.

It’s hard to put a value on something called “shopping experience” since it doesn’t discount the final purchase price at checkout, but I think Target should win some points for giving consumers a more upscale “feeling” than Walmart. 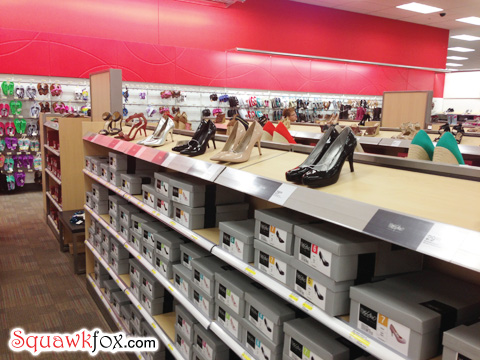 First of all, Target’s fitting rooms are generously sized with ample mirrors showing you every darn angle. There’s also a “Family Fitting Room” which is awesome if you’ve got a squirmy toddler in need of togs or require additional floor space to fit a stroller. Most moms and dads would agree this is a HUGE plus!

Target’s shopping aisles are far wider than Walmart’s — I wanted to measure with an actual measuring tape (and I would have) but I’m trying my best to not get kicked outta both stores, people! But yeah, Target’s grocery lanes don’t give me the cramped feeling I experience at Walmart.

I’m not one to shop and dine under one roof unless I’m surviving a trip to IKEA, but being able to down a tasty Starbucks Tall enroute to home is a bit of a Target draw for me. 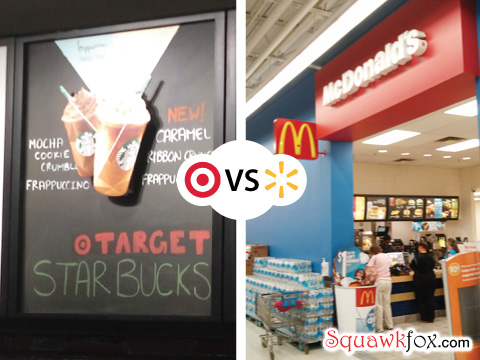 While Starbucks IS tasty and Target is kinda fun, you’ll save a fortune by making your Frappuccinos at home. See Make a Starbucks Frappuccino for $0.32.

And don’t tell me McDonald’s serves a superior cuppa to Starbucks. I’ve tasted both brews, and since this is my bloggy blog, I’m declaring Starbucks the coffee winner and a plus for shopping at Target.

Target vs Walmart: Reasons to shop at Walmart

I can’t believe no one besides bloggers have written about these awesome reasons to shop at Walmart over Target.

I asked my favourite coupon expert and blogging buddy Cassie Howard why she’s such a big fan of Walmart. She says it’s all about The SCOP.

“SCOP – Scanning Code of Practice. If an item $10 or under scans incorrectly at the cash register, you get it FREE! If it’s more than $10, you get $10 off. Most stores in Canada adhere to this policy but not Target.” — Cassie Howard, Mrs. January

The official name for what money bloggers tend to call “The SCOP” is the Retail Council of Canada’s Scanner Price Accuracy Voluntary Code. This code is an amazing thing if you care about consumer protection, want to pay the tagged price for your goods, and don’t want to be overcharged for incorrectly scanned goods at checkout.

Over the years I’ve used “The SCOP” to score mis-scanned items for free and have done my bit to share this neat bit of consumer advocacy with you guys. In The Definitive Guide: 22 Ways to get a discount on anything (part two) I told ya how to get your groceries for free by spotting scanner price errors at checkout using this code.

Since Walmart voluntarily follows “The SCOP” and Target does not, let’s agree with Cassie and deem Walmart a shopping win for consumers.

Another big reason Mrs. January (AKA Cassie Howard) shops at Walmart over Target is for this thing called coupon overage. She says Target does not accept coupon overage, “which is what makes Walmart so awesome.”

“Overage = Your coupon value is more than the cost of the item. For example, you have a $2 coupon for a $1 bottle of shampoo. You get $1 in overage that can be applied to your purchase or given to you in cash. Only Walmart and Giant Tiger give overage [in Canada].” — Cassie Howard, Mrs. January

There’s more to basic pricing when it comes to consumerism-ing at Target vs Walmart. Those with tiny tots (AKA babies) could see some serious savings by opting to purchase Walmart’s disposable diapers, formula, and baby cereals. Walmart shoppers can also benefit from better coupon policies and free goods by spying price scanning errors with “The SCOP.” 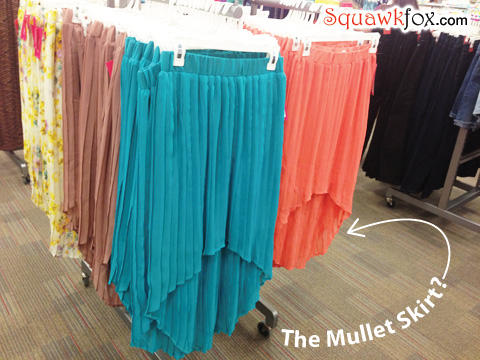 Target shoppers can save around 5.4% across a basket of personal care items, and nearly 30% on toilet paper alone. Become a frequent shopper and sign up for the Target REDCard and nab an additional 5% savings on most items. Target shoppers are easy to spot ’cause they wear nicer underwear under their mullet skirts and fancy designer dressers.

The bottom line for choosing to shop at any store is to do your own price check experiment to see if what you purchase on a regular basis is a fair price. Just don’t get kicked out of the store for snapping pictures of price tags in a quest to sleuth savings — it’s a bit of a bummer if you run a popular money blog. Seriously.