Is depression a good thing? Maybe. Maybe not.

I’ve always managed to complete my homework. From grade school math to university English I’ve never failed to attack the problem or argue a thesis. Sure, not all equations were elegantly solved and a thesis or two may have needed more proof, but my assignments were done and delivered on time. Go me. A+

Fast forward a decade (or three) and I sit here stumped with an incomplete. I don’t fear a failing grade since I’m not studying for marks or degrees or kudos. My problem-solving essay is more of a life skills acquisition sorta thing, which is far more useful than any grade. And yet with no pressure to perform I sit here, stumped.

The assignment seemed simple enough. When initially given by Dr. Niki, my smart yet sometimes sneaky psychologist, the one-line exercise went something like this:

“What are the positives that came from your depression?”

Maybe she asked it differently. Maybe she used a medical term. Perhaps she spouted off some science. Or likely she delivered my homework by turning a page from the Cognitive Behavioural Therapy (CBT) life lesson book. Regardless of how intelligently her question was posed, my inner intellect got annoyed and allowed my less-nerdy self to unleash an F-Bomb.

It felt so good. So I unleashed another. F—! (The best F-Bombs come in pairs, BTW.) Anyways.

Could anything good come out of depression?

Does being depressed have benefits?

My negative self-talkin’ self took the bait and went south. A third F-Bomb. (In Canada this is known as a ‘Hat Frick’). Anyways.

Other then a few choice swears, I came up blank. Dr. Niki laughed, and told me to think about it.

Perfect, because “thinking” was the probable problem that got me here in the first place. Thinking, rethinking, ruminating, over thinking, recursive rethinking about the over thinking, and stewing in the brutality of my own self-loathing thoughts was but one function that led me to the dark place known as depression. And now a professional person was asking me to “think about” the positive side of a negative turn.

I paid my money, because professional people who ask annoying questions get paid. I bought some mint bittersweet chocolate from Laura Secord because depressed and formerly depressed and never depressed people often find chocolate tasty. And I took the subway westward because after paying professionals and buying a kilogram of chocolate I needed a cheap way home.

With a cup of tea in one hand I stuffed the bitter sweets into my face with the other. Gobsmacked, I sat in a still place seeking the Martha Stewart of sadness — “Depression, it’s a good thing”. Exclamation point or question mark? 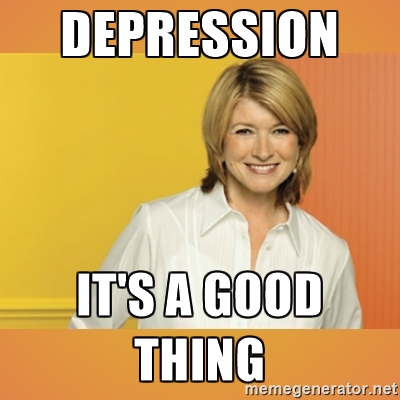 Ugh. More chocolate and another hot cup of tea.

Despite being outta The Pit for a while, I thunk a few thoughts of the downside first.

That’s the depressive’s gig. I wrote about it in Daddy plays. Mommy cries., so no need to retell the story.

Upshot time. Onto the positives. Maybe.

Since there’s no such thing as a ‘Depression Appreciation Day’ it’s a little tough to rethink sadness as a positive celebration — no one rejoices about being down, even if the party is only for a 24-hour period.

Depressives don’t hang out in joyous groups or dance in parades or wear special bracelets or sing anthems or dress in party attire or run for cures or colour worlds with rainbows and glitter. We should though, because rainbows are pretty and a cure would be fucking awesome.

Unlike many popular causes, the happy dance for a depressive tends to be more of a solitary movement — a quiet step out of the darkness to walk another few steps another day. Not committing suicide is our victory lap, and no one blasts a glitter bomb for that. Kinda dark, so here’s a Unicorn Chaser.

Sure, there’s the annual Bell Let’s Talk awareness campaign where a big for-profit corporation aims to “open the national conversation about mental illness to fight the stigma and the dramatic impact of mental health issues all across the country.” The initiative is lead by my sports hero Clara Hughes.

I applaud the media attention and money raised to fight the stigma of mental health. But here’s a bold idea — along with conversation, perhaps a good way to end the stigma of sadness (and other mental health issues) is to rethink calling it mental illness. I mean, what is mental illness anyways? When I needed knee surgery, got pneumonia, and was diagnosed with Celiac Disease no one said I suffered from physical illness. The doctors said my leg hurt because I needed knee surgery, I coughed because of pneumonia, and I couldn’t digest food because of Celiac Disease.

Saying “I suffered from physical illness” would have sounded weird (and kinda dramatic) especially if my ailment was a common cold. Yet, our phraseology around depression is a catch-all for a huge group of ailments. So ‘Let’s Talk’ about calling depression what it is — DEPRESSION. Done.

Also, the whole physical illness vs. mental illness divide seems a shallowing chasm thanks to this cool thing called science.

In The distinction between mental and physical illness (The British Journal of Psychiatry, 2001), Welsh psychiatrist Robert Evan Kendell discusses the origins of the divide while saying some powerfully smart things. I highly recommend reading this paper if you can manage through the medical terms and get to the plainer language bits.

Kendell on the divide:

“This has the unfortunate effect of helping to perpetuate two assumptions that have long since been abandoned by all thinking physicians, namely that mental disorders are disorders of the mind rather than the body, and that they are fundamentally different from other illnesses.

In reality, neither minds nor bodies develop illnesses. Only people (or, in a wider context, organisms) do so, and when they do both mind and body, psyche and soma, are usually involved.”

Divides are one thing. Perception is another. I often struggle when well-meaning people tell me to “snap outta it” or to “look at the bright side”. A personal low was when an acquaintance told me she “didn’t have time to be depressed” — a sideways implication was I had a choice about being sick.

Kendell on the perception:

“But there is no reason, justified either by logic or by medical understanding, why people suffering from, say, phobic anxiety or depression should be able to exert more control over their symptoms than those suffering from myxoedema or migraine.

There is a further and equally damaging assumption that the symptoms of mental disorders are in some sense less ‘real’ than those of physical disorders with a tangible local pathology.”

I think this Web comic from Robot Hugs neatly illustrates the point. I laughed, probably because I’m bent. Kudos to RH for nailing it.

I must be really bad at doing homework ’cause I still haven’t completed my CBT assignment. Or have I?

“What are the positives that came from your depression?”

Many shrinks and psychs would probably ask patients to consider specific positives, such as the discovery of thoughts, triggers, situations, people, and behaviours that can lead one down the spiral of depression. Yes, I’ve learned these. I’ve had to stop doing some stuff, I’ve removed certain situations from my life, and I avoid extending myself to those who do not reach back.

Given the possible gut-brain connection and how mental health may depend on creatures in the gut, I’ve also become far more vigilant about tummy health and more mindful of my Celiac disease. Guess that divide between physical health and mental health isn’t so clear cut, eh?

But these are not my answers. Sorry, Dr. Niki.

Could anything good come out of depression?

I am here.
I have a voice.
And I intend to use my voice, my life, and my platform to speak freely about the so-called taboos and social stigmas that plague us. Wealth, health, and self are intertwined and interconnected — so let’s stop pretending they are not.

So where else am I going with this?

You have a voice too. You also have a platform.

During my depression many of you reached out through emails, direct messages, and social comments. You also shared my writing with those close to you in need. You made all the difference. I have so much gratitude for your kindness and caring I cannot express my full thankfulness in words. You guys are the biggest positive and the grandest happy thought a sometimes quirky personal finance writer can hold. Hugs.