Do you suffer from costly data plan disease?

Symptoms are varied, but most suffers first report the sickness after buying a phone, gadget, game console, or an iPad-type thing with a mandatory communications package to make the dang gadget work.

Signs of the sickness include sore thumbs from excessive texting, interrupted face-to-face conversations from constant cell phone chatting, and a severely whacked wallet from the myriad of costly data plans. 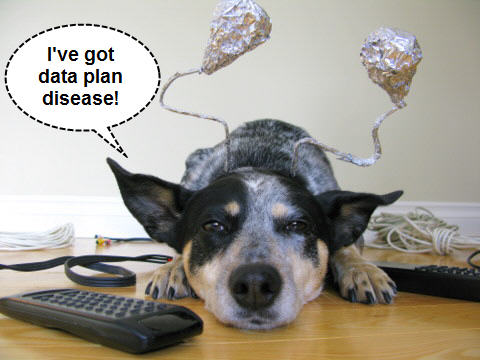 The biggest problem with ‘data plan disease’ is that the eroding effects on your savings are cumulative. Go ahead and add up your family’s cellphone minutes, cable or satellite TV services, high-speed Internet access, Xbox Live or PlayStation fees, Apple iTunes downloads, Netflix use, and your humble land line telephone (if you still have one).

Got that number? Now add in your overage fees, roaming charges, the teenager’s texting plans, system access fees, taxes, and any additional airtime fees (gulp), and you could be on the hook for $500 per month — that’s $6,000 each year — just for data plans! Feeling sick yet?

The New York Times ran the story As Data Flows In, the Dollars Flow Out and offered these budget busting numbers:

By 2004, the average American spent $770.95 annually on services like cable television, Internet connectivity and video games, according to data from the Census Bureau. By 2008, that number rose to $903, outstripping inflation. By the end of this year, it is expected to have grown to $997.07. Add another $1,000 or more for cellphone service and the average family is spending as much on entertainment over devices as they are on dining out or buying gasoline.

And those government figures do not take into account movies, music and television shows bought through iTunes, or the data plans that are increasingly mandatory for more sophisticated smartphones.

Americans should be a lot annoyed, but not super pi$$ed, by the communication costs they pay — Canadians have it far worse. According to a recent global telecom report from BofA Merrill Lynch (via Wireless North), the country that pays the most for cell phone use per subscriber is Canada, at $55 per month.

I took a good hard look at my own wireless and data plan numbers a while ago and came to the conclusion that my cable TV package had to go. Here are my current data plan digits:

My biggest source of ‘data plan disease’ is of course my Internet connection — living in rural Canada (in the middle of a forest) affords me few options for doing business online. That’s the price I decided to pay, and I cut my cable subscription to stay on budget.

The good news about ‘data plan disease’ is that the ailment is not fatal. You have the choice to cut services, minimize fees, and downgrade data packages to cut costs and save money. Your results will vary, sure, but by adding up your numbers, crunching your monthly spends, and doing the simple math I bet you can minimize this costly sickness.

Heck, I wrote a whole post about cutting back (50 Ways to Save $1,000 a Year), authored a book about saving money (397 Ways To Save Money), and shared my cable story in Breaking up with a cable company is hard to do. I know you can cut back too!

Your Thoughts: Share your data disease numbers here! How much are you spending monthly on data plans? And can you cut back?

Download this free audio training to gain
the insight and determination to reach your financial
dreams, on your terms.

No thanks, I’m good!